« Trump, Confederate Monuments, and Overt Nazism | Main | Of Gods and Guns »

I am one of the signatories of the statement below. If you are a Christian ethicist, I urge you to follow the links at the bottom of the page and add your name. 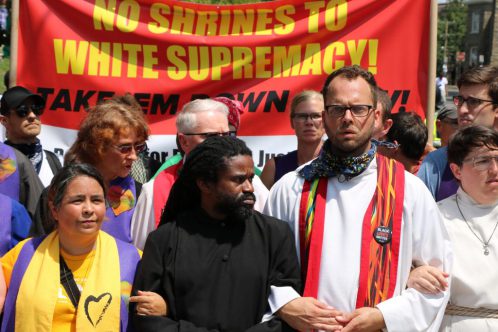 As followers of Jesus Christ and as Christian ethicists representing a range of denominations and schools of thought, we stand in resolute agreement in firmly condemning racist, anti-Semitic, anti-Muslim, and neo-Nazi ideology as a sin against God that divides the human family created in God’s image.

In January of 2017, white nationalist groups emboldened by the 2016 election planned an armed march against the Jews of Whitefish, Montana. On August 11th and 12th, hundreds of armed neo-Nazis marched in Charlottesville, Virginia. As we mourn the deaths of 32-year old counter-protester Heather Heyer and state troopers H. Jay Cullen and Berke Bates from this most recent incident, we unequivocally denounce racist speech and actions against people of any race, religion, or national origin.

White supremacy and racism deny the dignity of each human being revealed through the Incarnation. The evil of white supremacy and racism must be brought face-to-face before the figure of Jesus Christ, who cannot be confined to any one culture or nationality. Through faith we proclaim that God the Creator is the origin of all human persons. In the words of Frederick Douglass, “Between the Christianity of this land and the Christianity of Christ, I recognize the widest possible difference.”

The greatest commandments, as Jesus taught and exemplified, are to love God and to love our neighbor as ourselves; and so as children of God, and sisters and brothers to all, we hold the following:

Therefore, we call upon leaders of every Christian denomination, especially pastors, to condemn white supremacy, white nationalism, and racism.

We will bring the best of our traditions to an ecclesial and societal examination of conscience where rhetoric and acts of hatred against particular groups can be publicly named as grave sins and injustices.

Finally, as ethicists, we commit—through our teaching, writing, and service—to the ongoing, hard work of building bridges and restoring wholeness where racist and xenophobic ideologies have brought brokenness and pain.

(If you are a Christian ethicist or teach Christian ethics and wish to add your name, please email Tobias Winright at tobias.winright@slu.edu or Matthew Tapie at matthew.tapie@saintleo.edu or Anna Floerke Scheid at scheida@duq.edu or MT Dávila at mtdavila@ants.edu with your name, highest degree, title, and institution. Institutions are named for identification purposes only and this does not necessarily represent their support of this statement, although we hope they do, too.)