Who Does Not Work Shall Not Eat 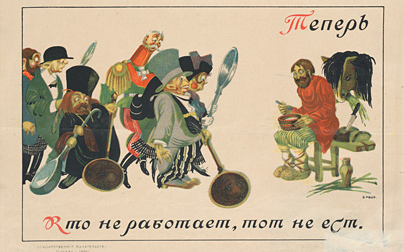 Frequently in arguments over social policy, conservatives will haul out Paul's admonition in 2 Thessalonians "Anyone unwilling to work should not eat" in order to justify cutting or eliminating welfare programs, on the ground that such programs promote "idleness" among the poor.

In Religion Dispatches, Dan Schultz critiques those arguments, first by noting some of the inherent problems that both those on the right and the left face in translating scripture into social policy, but then by noting how misapplied the this particular passage is:

Paul wasn’t writing to a “sect.” It was a particular church at Thessalonica, and he was writing to correct a mistake of his own creation. In 1 Thessalonians, he tells the church that Jesus will be coming soon. That encourages some of the members to give up their jobs in preparation for the parousia, living off the community while they wait. Those are the people Paul says should get back to work: Jesus may be coming, but not so quickly that you don’t have to contribute to society.

Perhaps Rep. Arrington knows of a widespread problem with people receiving SNAP benefits who refuse to work because they think the second coming is just around the corner, but I sort of doubt it.

I’m going to give the edge to Protas here. Generalizing away from specific passages, the unmistakable pattern in scripture is meaningful social care for the poor. That doesn’t command government intervention, of course, but neither does it rule it out.

Schultz rightly notes that plucking this passage out of its context in order to justify refusing support for the poor does violence to both the situation in which Paul was writing, and to the overall tenor of both Judaism and Christianity with respect to care for the poor. It is also worth noting, in passing the context of both Greek and Roman society at large, which were based on the widespread use of slave labor. For most of the privileged classes, "idleness" was not a problem for the poor, but a problem for the wealthy. The poor had no choice but to work if they wanted to eat, and in the case of slaves had no real choice at all. But in the case of the rich, the landed, the elite, who were often also the ruling classes, the legislators, the statesmen and the philosophers, idleness was a fact of life. They relied on the labor of the poor and of slaves in order to support their idleness.

However, the larger point remains vital and relevant: How should we use scripture in the formulation of public policy. On the one hand, in a pluralistic democratic society, the answer is "we shouldn't" at least in the sense that, just because we believe the Bible says something is not, in itself, a reason we should enact that thing as law. On the other hand, however, as Schultz notes, for people of faith, the traditions to which they belong, including scripture, form their moral predispositions and attitudes in inescapable ways. We learn who we are as moral beings through our engagement with those texts and traditions, so they inevitably shape our attitude toward social policy.

But in that case, it's vitally important that we understand and interpret those texts properly, in their own contexts and with respect to their relevance to our time and place. Without a robust hermeneutic that can allows us to move from the time and place of those texts to our own, at best we will misinterpret the social implications of the Bible, and at worst, we will use those misinterpretations in ways that harm the poorest and the most vulnerable among us.