Captain Kirk, the Bible, and Hell 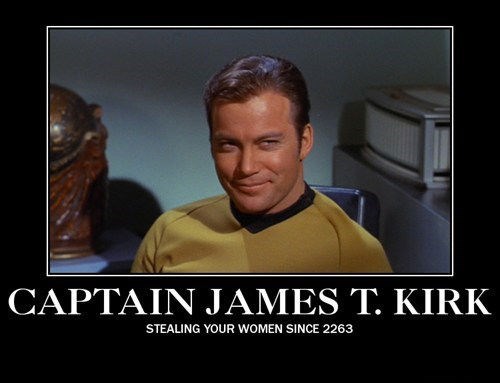 Fred Clark at Slacktivist makes an interesting analogy between Captain Kirk's love life and the way we read the Bible:

We remember it wrong because we see that green woman in the opening credits through the filter of our idea of James T. Kirk, Womanizer and that filter reshapes what we see, reinforcing the mistake.

Horáková calls this dismembered remembering “Kirk Drift,” and dives deep into the sources, mechanics, and repercussions of this pernicious, pervasive form of self-deception. It’s a long, twisting exploration of this phenomenon, full of wild tangents and asides that later turn out to be connections back to this central idea. I’m sure it will be read by Star Trek fans, but it also should be read by history students.

And by seminarians. Because, of course, this same dynamic of “Kirk Drift” is also at work whenever we read, and mis-read, the Bible. That text, perhaps more than any other, is colored by fans who read it full of certainty about what we imagine we know for sure, but just ain’t so.

Fred then connects this to the Christian conception of Hell, which, as it turns out, is not really in the Bible any more than Kirk seduced a green alien on Star Trek:

Maybe the biggest example of this for me, personally, had to do with the doctrine of Hell. I was sure that must be in there, in the text. It had to be, right? I mean, this is something I’d learned and absorbed for my entire life growing up in the church. Everybody knows it’s there in the Bible. Everybody knows that’s where it comes from, right?

Except it doesn’t. The word is in there, but the doctrine we’ve constructed out of and around that word just can’t be found in the text itself. That doctrine is something we carry to the text and then imagine we find there whenever we encounter the word — just the same way that our preconceptions and misconceptions about Captain Kirk get mistakenly reinforced every time we see that image of the green woman in the opening credits.

This is a common problem with the way we construct theology on "Biblical" grounds. Fred notes later in the article that even when he accepted a view of the Bible as infallible, he still recognized the human limitations in interpreting it. I'd go farther (and perhaps Fred would these days as well), and say that the text themselves are subject to that same fallibility. They weren't written by God, and they weren't preserved from error through any supernatural intercession. They are human testimonies to the presence and action of God in their lives, subject to all of the human limitations that those witnesses were burdened with.

And this is certainly the case when it comes to the idea of Hell. What is actually a mishmash of different terms and ideas got squeezed together into a theological monstrosity that then got taken for granted as the Biblical view of the issue. Of course, it may still be the case that there is some form of eternal separation from God. But the "fire and brimstone" view of Hell that has become the predominant view, and remains central to the theology of many evangelicals, is simply not there in the Bible. It is a construct, and not a very good one at that. What's more, I would argue strongly that it is a construct which undermines and diminishes precisely what is most central to Christian faith -- the centrality of God's grace as manifested in Jesus Christ.

Posted at 09:04 AM in Religion, Theology | Permalink