« For a Universal Basic Income | Main | Was Reinhold Niebuhr a "Real Theologian"? »

What Is a "Nuanced" Stance on Abortion Anyway? 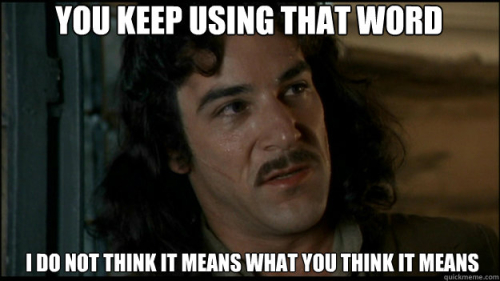 Yesterday I posted about Tom Groome's New York Times article arguing that the Democrats need to stop being the "abortion party," and noted the two Religion Dispatches articles criticizing Groome. After the article posted, Charlie Camosy chimed in on Twitter to argue:

It is pro-lifers (of mutiple parties) who have nuanced policy positions. Democratic party has utter lack of nuance. https://t.co/1CvFcQz78N https://t.co/Sl6SRGLDFa

This led me to respond that I'd never found the pro-life position particularly nuanced, and that Groome's article reinforced that opinion. To which Camosy responded:

@ScottPaeth 20 week ban with exceptions vs #shoutyourabortion as a social good paid for by pro-lifers. which is more nuanced?

And then it was on. You can go read the whole exchange on Twitter, but since it's very difficult to carry on a ... well nuanced conversation 140 characters at a time, I thought it would be worth thinking at a bit more length about the subject here.

As I read Camosy's defense of the "nuance" of a 20-week ban on abortion, I kept thinking I needed Inigo Montoya to show up and chime in "You keep using that word; I do not think it means what you think it means." And this, it seems to me, was indeed part of the problem. We both understood by the word "nuance" something very different than the other did, though I have to say that, re-reading the thread this morning, I still don't think the word means what Camosy thinks it means, and it's certainly not very nuanced to portray "Shout Your Abortion" as representative of the default position of most pro-choice folks.

First of all, it seems to me that Camosy was repeatedly misrepresenting the current Democratic party platform on the issue, and Hillary Clinton's own words on the matter. To be clear, I was defending what for me has always been the best liberal approach to the question of abortion, as encapsulated by Bill Clinton back in the 1990s, that abortion should be "safe, legal, and rare." Camosy, citing himself, kept referring to an LA Times article in which he asserted that the Democratic Party platform "betrayed millions of party faithful." But that article is hardly an example of nuance. It criticizes the platform for insisting on the removal of state restrictions on abortion, and insisting on it as a core element of reproductive health, while eliding all of the ... well nuance of the reason why those provisions were included in the first place: Repeated conservative attempts to throw up insurmountable roadblocks to abortion under any circumstances.

Even a passing familiarity with the ways in which Republican state legislatures have sought to do end runs around the Supreme Court rulings on abortion by, for example, requiring doctors working in abortion clinics to have residency at a local hospital, and then refusing them that residency, or creating expensive and unnecessary zoning and construction requirements for abortion clinics. These tactics have sought to create circumstances in which abortion, even if technically legal, became impossible to actually procure in some states. Ignoring those particular circumstances is not very nuanced.

But more generally, it's worth noting that the Democratic platform actually did a pretty good job of accomplishing the goal of ensuring that abortion was both safe and legal on the one hand, and rare on the other. The planks insisting on the right to access to abortion, and its importance for a general policy of reproductive health serve to ensure the first two criteria. The third is accomplished through platform language that ties the right to abortion to the right to health care generally and, most particularly to the right to have a child. Here is the particular language:

We will address the discrimination and barriers that inhibit meaningful access to reproductive health care services, including those based on gender, sexuality, race, income, disability, and other factors. We recognize that quality, affordable comprehensive health care, evidence-based sex education and a full range of family planning services help reduce the number of unintended pregnancies and thereby also reduce the need for abortions.

And we strongly and unequivocally support a woman’s decision to have a child, including by ensuring a safe and healthy pregnancy and childbirth, and by providing services during pregnancy and after the birth of a child, including adoption and social support services, as well as protections for women against pregnancy discrimination. We are committed to creating a society where children are safe and can thrive physically, emotionally, educationally, and spiritually. We recognize and support the importance of civil structures that are essential to creating this for every child.

And indeed there is ample evidence to demonstrate that, if your goal is to reduce abortions, these are the policies that you should be advocating. So when Camosy complains that the platform kept the "safe and legal" while abandoning the "rare," it seems to me at least that he didn't read the platform with sufficient ... nuance.

There is also evidence that, in terms of implementation of these policies, abortion rates decline under Democratic administrations. When I made that case to him, Camosy responded by linking to a Snopes article that he claimed labeled the assertion "False." However, a more ... nuanced ... reading of the Snopes article shows that what was false was something that I wasn't arguing, and what wasn't false was what I was claiming. The Snopes article addresses the question of whether abortions both go up during Republican administrations and decline during Democratic administrations. And, since Roe v. Wade, it is apparent that abortion rates do not in fact increase under Republican administrations, but they do decline (and decline more) under Democratic ones. This chart illustrates the point: 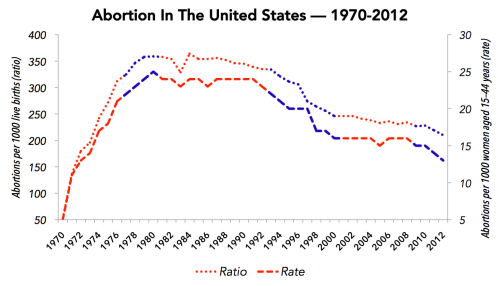 Charlie contended that a "Stats 101" analysis of the data would show something else, though he didn't elaborate. But while the trend line seems to either hold stead or decline only slightly during the Reagan and Bush years, it drops precipitously under both Clinton and Obama. So perhaps Charlie will get around to elaborating on his point in some other venue, but it still seems to me that the evidence does demonstrate that if your goal is to make abortion rarer, Democratic policies do the job better than Republican ones, though of course it's always worth remembering that correlation does not equal causation.

OK, so then, is a 20-week ban, as Camosy advocates, "nuanced"? Well it's certainly far more nuanced than the position taken by the Republican party, but a getting hit in the face by a brick in a gym sock would be more nuanced than anything in the Republican party these days. However, what the 20-week ban fails to account for is the situation of woman who, late in pregnancy, discovers a fatal defect in the gestating fetus, and the emotional and moral turmoil that women in that situation face. I suppose the response is that such instances are fairly rare, but then, late pregnancy abortions are rare to begin with. Camosy does of course note that the ban would come "with exceptions," but there the devil is in the details, and if the exceptions were sufficiently broad, it would basically make the ban worthless as policy anyway. A 20 week ban would almost certainly not make most abortions more rare in any respect, while increasing the suffering of families in genuinely tragic circumstances. Whether or not you think that abortion should be available in those cases, it remains the case that at the ban Camosy proposes once again fails the nuance test.

In the end, both Groome's and Camosy's complaints seem to amount to the same thing: They want the Democratic party to move closer to their position on abortion. That is of course a totally fair position for them to take. But to argue that the current Democratic Party policy isn't precisely what I said above -- to make abortion safe, legal, and rare -- suggests at a minimum a lack of charity in how the democratic position is understood and interpreted. And it certainly represents a failure of nuance.