« The Morality of "The Hateful Eight" | Main | Free Speech, Offense, and Academic Discourse »

The Church of the Flying Spaghetti Monster: Not a Religion 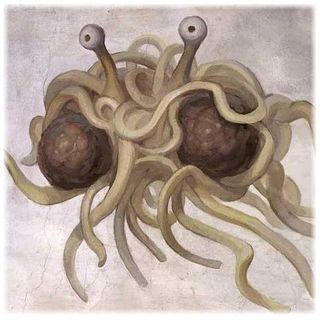 Earlier this week, a Federal District Court ruled that the Church of the Flying Spaghetti Monster (CFSM) should not be considered a religion under U.S. law. According to an article on the ruling by the Religion News Service, this was based upon the fact that the Church was clearly intended to be satire, and not anything that could be considered a "genuine" religion.

In a 16-page decision, the U.S. District Court of Nebraska ruled that Pastafarianism is satire, not sacred, and that anyone who thinks it is a religion has made an error “of basic reading comprehension.”

“This is not a question of theology,” the ruling reads in part. “The FSM Gospel is plainly a work of satire, meant to entertain while making a pointed political statement. To read it as religious doctrine would be little different from grounding a ‘religious exercise’ on any other work of fiction.”

What I find interesting in the ruling is the fact that it makes a clear demarcation between something that is transparently satirical, and what would commonly be considered "genuine" faith. It raises a number of sticky issues, not least of which is "how can one go about distinguishing "genuine" from "inauthentic" religion. However, I don't think that the problem is nearly as difficult as the ruling's detractors are seeking to make it.

In the view of the CFSM's supporters, it is impossible to distinguish between a "real" religion and the CFSM, since everything that appears absurd about that faith is, in their estimation, no less absurd than the doctrines of Christianity, Islam, Mormonism, or Scientology. By ruling against Pastafarianism (as the church is sometimes referred to), they argue that the court is  making declarations about what constitutes "true" versus "false" religion.

However, that's not how I read the situation. The question is not whether the object of the religion is true or false, but whether the belief in the object of religious faith is sincerely held by adherents. The problem isn't that there is no Flying Spaghetti Monster, it's that absolutely no one really believes that there is one. As an act of satire, the CFSM has done its job too well. It has set itself up as such a transparent attempt to troll genuine religious belief, that no one can possibly take it seriously as a religious faith, to the extent that, even if someone were to claim to believe it sincerely, it would be quite clear that this is simply part of the act. (And if you don't believe me, try listening to or reading someone affirm the doctrines of Pastafarianism without conveying an obvious smirk).

This is in distinction from, say Scientology, which I have in the past defended as an "authentic" religion. By this I do not mean that I believe its doctrines to be true, or even remotely plausible. Rather, in thinking of Scientology as a religion, I recognize that there are many people who, for better or for worse, hold it as a sincere matter of faith. Now, I have heard from former Scientologists that much of the leadership of the Church is corrupt and abusive. This is probably completely true. I've heard enough similar reports to grant that a high degree of probability. But it's irrelevant to the question of whether it constitutes an authentic religion, because again, it's not about the truth or falsity of the doctrines, it's about the sincerity with which they are held. It's not about the virtuousness of the church's leadership, it's about the degree to which they are genuinely held in esteem by their followers, or can at least make a credible case that they are.

And this is the problem with the CFSM. One respondent in a conversation about this asked "why must it be the case that a belief is held sincerely in order for a religion to be authentic," to which I responded, "because the very nature of the word "belief" implied the idea that the thing believed is sincerely held to be true. There is simply no such thing as a genuine "belief" which is not sincerely held. Since nobody claiming to hold to the beliefs of the CFSM has been able to make even the most basic case that they hold those beliefs sincerely, it cannot be considered to a genuine religion. It's too successful as an act of satire. If the CFSM had wanted to be held as an actual religion, it would have had to do a better job cultivating a base of followers that could credibly claim that they sincerely believe it.

This, to be clear, has nothing to do with the question of whether one can "prove" the existence of the Flying Spaghetti Monster any more than one can "prove" the existence of God. The response that the FSM is just as credible as the Christian or Muslim God is, from a legal perspective, beside the point. This is not a matter of philosophical proof or comparative theology. It's a matter of what the courts often call the "reasonable person test." Would a reasonable person, looking at the CFSM conclude that its adherents held its beliefs sincerely, or merely for the purposes of satire. On that basis, I think a court could validly conclude that the CFSM is not a religion because it's precepts are not sincerely held.

Now, there may be other grounds on which one could make a case for the validity of the CFSM as a religion, but I'm of the opinion that, as New Religious Movements go, it's really not very interesting precisely because it's so obviously satirical. What I'd be interested in seeing would be a case where, for example, someone who followed the Jedi religion wanted that to be officially recognized. There are, after all, those who hold that Jedi-ism is a genuine religious belief, and they hold it sincerely. I think one could make a very compelling case, in a way that one can't for the CFSM in favor of adherents of Jedi religion, on much the same grounds as Islam, Christianity, Judaism, or Scientology.