« Once More Into The "One God" Breach Dear Friends | Main | The Church of the Flying Spaghetti Monster: Not a Religion »

The Morality of "The Hateful Eight" 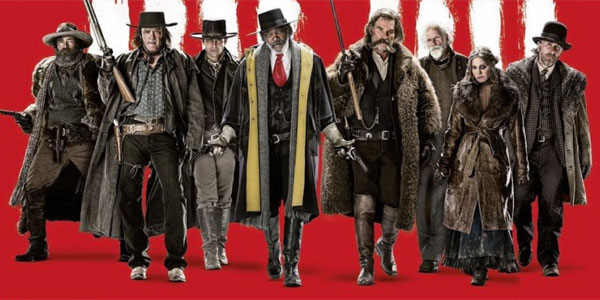 Last night I had the opportunity to see The Hateful Eight (in its much vaunted 70mm, roadshow format, with a souvenir program and everything!). Tarantino's movies are, of course, always controversial, and this movie is no different. But as I discussed it afterwards with my companions, I realized that, despite the complaint that his movies revel in violence and nihilism, there is actually a moral core to Tarantino's work that is often overlooked.

There will be spoilers in what I am about to write, so consider yourself forewarned.

The Hateful Eight is Tarantino's homage to the Westerns of Sam Peckinpah, but it's equally indebted to the drawing room mysteries of Agatha Christie. It tells the story of seven bad men and one bad woman trapped together in an isolated way station in the old west, waiting out a blizzard. Two of the men are bounty hunters. John "The Hangman" Ruth, always brings his bounties in alive to be tried and hanged. Major Marquis Warren is an African American Civil War veteran, who claims to be in possession of a personal letter from Abraham Lincoln. The woman, Daisy Domergue, is Ruth's bounty. Along the way, they also pick up a man who claims to be the town's new sheriff, but who also turns out to be an unrecalcitrant racist, who once belonged to a unit of Confederate soldiers who terrorized black towns in the name of "honor in defeat." Before we even arrive at the way station, tensions are running high among these four.

Once they arrive at the way station, they meet four more men. A Mexican named Bob who claims to be running the place, a cowboy on his way to spend Christmas with his mother (did I mention this is a Christmas movie?), the local hangman, and a former Confederate general. As the snow traps them, the central question driving the action is who is there to betray whom, and who will make it out alive.

It's no spoiler to say that not everyone does. Nor is it a spoiler to note that, along the way, enormous amounts of blood will be spilled. This is after all a Quentin Tarantino movie. If he really wanted to surprise us on this score, he'd make a movie with no violence at all.

However, that having been said, the level of violence is relatively muted for the first two hours of the movie. From the early panoramic scenes of a stagecoach traversing a mountain pass to the bulk of the time our cast of characters spends trapped together in the way house, most of the movie passes with relatively little violence (however, unfortunately most of the violence that does take place in those first segments is inflicted on the one woman in the cast). The third hour more than makes up for the slow burn, however, once the masks come off and the participants in the setup are revealed.

Here is your last warning about spoilers. After this point I will be revealing elements of the movie's plot that you might rather not know.

In the last act, it's revealed that Daisy's brother, along with the Mexican, the Brit, and the Cowboy, have staged an ambush at the way station in order to rescue her. After killing everyone there except the Confederate general, they set up the scene to appear innocent and then wait for Ruth to drop his guard. Eventually he does and gets himself poisoned to death along with their stage coach driver. At this point, Marquis and the Sheriff, who have every reason to hate one another, team up to figure out who the murderers are. They quickly establish that everyone except the two of them is now in on it (Marquis had killed the general right before the intermission, after a long scene where he described his humiliation and murder of the General's son, an act of revenge for the General's misdeeds during the war -- again, these are all bad people).

As violence, murder, and chaos descend on the cabin, everyone finds themselves dead except for Marquis, the Sheriff, and Daisy. Marquis is fatally wounded, and the Sheriff is not much better off. Daisy offers him a deal: If he will kill Marquis and let her go, he can cash in the bounties on the men her brother had brought to help rescue her.

Before I talk about what happens next, it's worth talking a bit about the connection between the western tropes that Tarantino is accessing (such as those in Sam Pekinpah and Sergio Leone) and naturalistic fiction. Naturalism stressed the struggle of human beings against their environment and their nature. It tended to be morally pessimistic, and leaned toward a degree of nihilism, in that it portrayed human beings as ultimately slaves to their own natures, and to the whims of fate. Watching the movie, I could see Tarantino dipping into that well, presenting us with eight characters who were not bound by any rules of morality of any sense of transcendent value, looking only to their own survival and sacrificing whoever and whatever was necessary in order to do so. At best, perhaps, they were bound by notions of kin and blood, whether Daisy's brother's attempt at bloody rescue, the Sheriff's lingering loyalty to the values of the Old South, or Marquis's desire to see justice done for the years of slavery and repression heaped on black Americans. But even there, one could argue that those bonds of blood and kin are tenuous at best, and can break under the right stressors. If this were a work of naturalistic fiction, then when those bonds were finally dissolved for the surviving characters, all that would be left would be the desire for survival and gain.

However, that's not what happens in the bloody aftermath, once everyone is dead except for Daisy, Marquis, and the Sheriff. After listening to Daisy's offer, and perhaps even seriously considering it for a moment, he instead rejects it, on the grounds that, as the Sheriff of Red Rock, he has a duty to perform, and furthermore, he doesn't believe Daisy's threat that, if he kills her, fifteen additional men are waiting in town to kill everyone. He is about to shoot her when Marquis insists that, for the sake of John Ruth, they enact a rough form of frontier justice and hang her themselves. Thus, as both men lay dying, and despite the fact that they each have good reason to hate one another, they overcome their mutual hatred in order to see some form of justice done.

Now, perhaps I'm stretching more than a bit in seeking to skim some form of moral redemption from this grand guignol, and there is certainly much to criticize in the way that Tarantino brings this drama to a conclusion. Certainly the violence is excessive. Certainly Tarantino seems to take far too much glee in acts of casual misogyny (directed mostly toward Daisy, though she is as thoroughly despicable as every other character), and in allowing the characters to express and explore their own depravity. And certainly the light of redemption at the end of this very deep and dark tunnel that Tarantino has led us down is very dim, yet I would still argue that it is there, and that, in spite of the racism, in spite of the misogyny, and in spite of the violence, Tarantino's message in this movie is about the possibility that, even under the most brutal circumstances, we can overcome even the most entrenched differences between us in the name of some transcendent reference point. Naturalism does not rule the day. In the end, our lives exist for the sake of something more than mere survival. John Ruth may not have been much of a moral guidepost for The Hateful Eight, but he did believe in the need for justice, and his example ultimately inspired the two remaining representatives of social order in that cabin to seek to bring about what justice they could, given the limited means at their disposal.