« Do Christians and Muslims Worship the Same God? | Main | Once More Into The "One God" Breach Dear Friends » 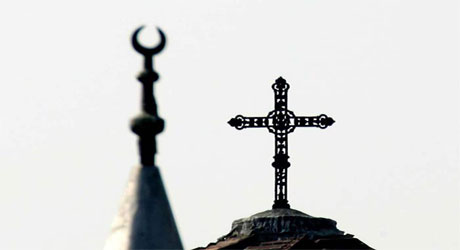 Much as I've appreciated Miroslav Volf's defense of the argument that Christians and Muslims worship the same God, one passage in his Washington Post article jumped out at me as rather dissonant, but I didn't really feel qualified to comment on it. However, it turns out that my Catholic Theological Union colleague Scott Alexander noticed the same thing, and he is qualified to comment. Here's the passage from Volf:

Clearly, Christians and Muslims disagree, just as Christians and Jews do, on the questions of the Incarnation and the doctrine of the Trinity. These are rather basic disagreements, though profound as they are, they do not nullify the underlying argument. Christians and Muslims may be said to worship the same God, even if they disagree about the nature and attributes of that God. However, what about this business about Muslims not believing that God is Love, or that God commands us to love our enemies? Scott Alexander writes in response to these assertions:

My experience with Muslim interlocutors of various types have taught me that, although they may reject the divinity of Jesus of Nazareth, Muslims have their own different but equally powerful expressions of God’s love in profound divine-human intimacy.

Muslims personally testify in an abundance of ways to the immanence of God in their lives—the God whose active will is felt in the pulse of the very blood coursing through their veins. This sense of intimacy with a God who loves (His) creation is also echoed in classical interpretations of the two divine attributes attested in Islamic discourse above all others: “The One Who is (Him)self Compassion” and “The One Who Ceaselessly Acts Compassionately in (His) Relationships with All Creatures.”

I discussed this point with a Muslim colleague who pointed out that the Islamic emphasis on God’s rahma or “mercy” is the equivalent of Christian agape in that it is “flows eternally with no expectation of reciprocation.”

Alexander then goes on to address the assertion that Muslims aren't commanded to love their enemies:

In the context of burgeoning Islamophobia in the U.S. and rhetoric which propagates the falsehoods that Islam is an inherently violent faith and that Muslims are uniquely prone to violence in the name of their religion, Volf suddenly resurrects another age-old Christian anti-Muslim polemic. He declares, by way of implicit contrast with Islam, that “love of enemy” is “the signature claim of the Christian faith.”

The first is whether Prof. Volf is familiar with verses such as Q 41:34:

“[Given the fact that] goodness and evil are not equal, defend yourself [against evil] with what is greater in goodness, such that the one between whom and yourself there is enmity may be as though s/he had always been your intimate friend.”

He goes on to ask how any religion can be said to have a singular "central claim," the absence of which would make it cease to be what it is. He then concludes:

Volf seems to imply, Wheaton and other Evangelical Christian institutions and theologians can then get about the more important business of truly loving Muslims by showing them just how flawed their understanding of the God they worship really is.

As a Christian committed to the study of Islam and Christian-Muslim dialogue, I must respectfully offer my “thanks, but no thanks” to Prof. Volf’s well intentioned but ultimately troubling intervention in the controversy over Prof. Hawkins’s suspension.

I'm not as willing to throw over Volf's whole argument because of these flaws, but I do recognize that they are flaws in his argument. What Volf, Alexander, and I all share is a commitment to the creation of an ongoing conversation between Christians and Muslims, which recognizes and addresses the genuine core differences between them, but also engages in an honest assessment of what we share in common. When Volf argues that "Many Christians and many Muslims worship the same God," I understand him to be saying that those of us who recognize God as the common source and originator of our distinct faiths, and affirm that God wishes us to live in peaceful community with one another, then we are worshiping the same God. Of course, by that same argument, it can be said that Christians and Muslims who desire this share more in common with one another than they each do with members of their own faith that are committed, as far too many are, to the perpetuation of violence and conflict.

Posted at 08:51 AM in Current Affairs, Political, Religion, Theology | Permalink