« The Ethics of Satan | Main | Religion, Violence, and Rene Girard » 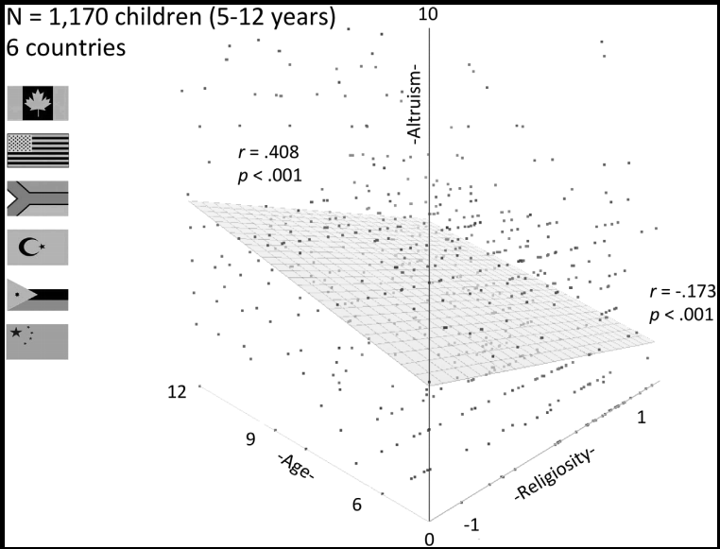 The recent study on the relative altruism of religious and non-religious children has come in for a bit of criticism since it was released a few months ago, to much fanfare. Initially the reporting on the issue was somewhat breathless (and, among my atheist Facebook friends, kind of gleeful). At the time, I withheld judgment, on the premise that a) pretty quickly some criticisms would emerge and that b) regardless, there's not a lot you can determine on the basis of a single study.

Sure enough, criticism began to emerge relatively quickly, including claims that the study overstates the statistical variance between its religious and non-religious subjects, and that its methodology is unclear. Here, for example, is one critique:

Similarly, critics have noted that the central terms being measured in the article -- "religion" and "altruism" -- are themselves notoriously difficult to define. Added to that, there were a great many variables that the researchers did not control for. And again, the researchers apparently did not account for the fact that the bulk of their identified "non-religious" children were all from China:

How do I know all of this? Educated guesswork. I could be wrong. But here’s how the numbers break down: globally, 323 families in the study identified as non-religious. And 219 kids in the study came from China. It is extremely unlikely that more than a handful of the Chinese families identified themselves as Christian or Muslim, and we know for sure that they mostly avoided identifying as Buddhist, because just 18 families in the whole 1,170 kid dataset did so. Nobody identified as Confucian. Just six families, worldwide, said they were “other.”

By elimination, that leaves around 200 Chinese kids for the non-religious side of the ledger, or around 60% of the total non-religious pool.

So what the study is picking up on as "non-religiousness" may be better described as a quality of the particular sample pool that was predominantly non-religious, that is, Chinese children from the Guangzhou province.

None of this would really matter that much -- because again, you can't determine much from one study under any circumstances -- if the authors did not try to draw sweeping conclusions from it:

“Nonreligious children are more generous,” explained a headline at Science magazine. “It’s not like you have to be highly religious to be a good person,” Decety told Forbes. “Secularity—like having your own laws and rules based on rational thinking, reason rather than holy books—is better for everybody.” Forbes headlined the article “Religion Makes Children More Selfish, Say Scientists.” (Decety tweeted a link to the piece). In the Forbes interview, Decety cautioned that there would be naysayers, at least among the anti-science crowd. “My guess is they’re just going to deny what I did—they don’t want science, they don’t believe in evolution, they don’t want Darwin to be taught in schools.”

See. Not only are non-religious children more generous, but secularity (defined, helpfully as "reason" over against "holy books") is "better for everybody." And, if you don't believe that this study proves that, it's not because the study is flawed, but because you're the kind of person who doesn't believe in science and wants to ban evolution.

Most of what I've gleaned here comes from an article at Religion Dispatches' The Cubit blog, which deals with issues at the intersection of religion and science. It goes over many of the problems with the study. But I want to stress that I think that the study is suggestive and bears follow up. It could very well be that a better constructed study, that does a better job accounting for independent variables, that has a clearer methodology, a larger sample size, and a more carefully defined central question, could reaffirm what this study does. It actually wouldn't surprise me much, because I don't think that religion of any kind necessarily makes a person better, or that its absence necessarily makes one worse. Religion is one factor among many in the construction of morality, and I'm Augustinian enough to know that sin lurks even in the hearts of the most pious. Yet, that said, I can't help but appreciate the conclusion of the Cubit writer, who writes:

In the past few decades, there has been a sharp divergence between those who study religion from within sociology and the humanities, and those who approach it from the side of social and evolutionary psychology. The humanists and sociologists have moved toward more and more granular snapshots of religious life, leaving behind the old, sweeping Religion is x, y, and z formulations that defined the good old days, when a dude in an office at Oxford could comfortably sketch out a theory of ritual based on secondhand ethnographies from remote tropical islands. Meanwhile, the social and evolutionary psychologists seem to be flying full-tilt in the direction of more and more grand theories of The Role of Religion in All Humanity.

From my semi-neutral post as a journalist who covers both fields, I’d like to suggest that the social and evolutionary psychologists are more full-of-shit than the humanists. The fact that someone like Decety feels comfortable taking his sticker games and making public comments about the fundamental nature of morality and secularity feels slightly surreal. (It’s not just in Forbes interviews. Here’s the final line of the paper: “More generally, [our findings] call into question whether religion is vital for moral development, supporting the idea that the secularization of moral discourse will not reduce human kindness—in fact, it will do just the opposite.”)

The problem is not that Decety and his colleagues’ results aren’t interesting, or even that they’re wrong—for all I know, all the world over, kids who engage more with certain ritual experiences are less kind to their peers.

The problem is that, absent robust evidence for his generalizations about the Nature of all Christians and Muslims, it is difficult to tell where Decety’s grand claims emerge from actual evidence, and where they may owe a debt to politicized beliefs about how religion in general, or specific religious traditions (i.e. Islam), motivate people to do bad things.