The Ethics of Satan 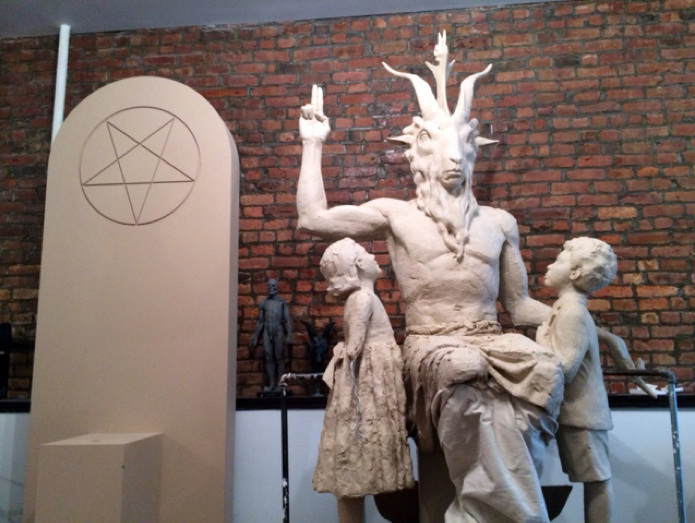 Via James McGrath (to whom I am increasingly tempted to simply farm out all of my theo-blogging) I see that there has been some discussion of the so-called "7 Precepts" of the Satanic Temple, and their alleged moral superiority to the 10 Commandments of Judaism and Christianity. Apparently this has gotten some traction in the atheist blogosphere, and James decided to address it himself. The seven precepts, as the Satanic Temple defines them are:

Now, in some ways, this is not a bad starting point for a moral conversation, and I could probably get behind several of the principles on this list. Others would require a bit more discussion or clarification. For example, it's not at all clear to me that "the freedom to offend" is something that I should take at face value as morally permissible, or as something that I'm obligated to "respect." Similarly, it's not clear to me what moral status pertains to conforming our beliefs to science. Certainly that's true of areas that science addresses, but it's not clear to me how broadly that's intended to be applied. And it's not clear that either of these is more morally compelling than "Don't murder," "Don't Steal," "Don't Covet" and "Don't Commit Adultery." However, the general appeal to empathy, compassion, wisdom, and justice is all well and good.

But what's striking about this is how little it has to do with Satan or Satanism. Again, recognizing that the Satanic Temple is attempting to be provocative, it still associates itself with a set of symbols and with a religious movement that is best known for embodying none of those principles. Modern Satanism can be traced back to the formation of the Church of Satan by Aton LaVey in 1966. Certainly you can point to predecessors, such as Alastair Crowley, but any contemporary movement basically has its roots there. But LaVeyan Satanism was created to embody precisely the opposite of the values that the Satanic Temple claims to favor. It's best understood as a religious application of the principles of Ayn Rand's philosophy of Objectivism -- selfishness, hedonism, and the disregard of moral principles such as, for example, justice, empathy, and compassion. It's a sort of symbolically freighted neo-Nietzscheanism. Like LaVey's Church of Satan, the Satanic Temple is atheist, in that they don't believe in God or in a literal spiritual figure of Satan. But there is really nothing else to connect what the Satanic Temple claims to stand for with what is commonly known as Satanism.

Now, far be it from me to tell anyone that they can't call themselves Satanists if they want to. But it's a sort of a strange thing. It would sort of being like saying "Yeah, I'm a Gandhian, except for the non-violence part." Granted, there are a lot of Christians who say essentially that with regard to Jesus: "Sure, I'm a Christian, except for the whole 'do unto others as you would have them do unto you,' bit." But that's hardly a convincing argument for the use of the term.

But leaving that aside, James makes an important point about the difficulty of translating the morality of the Ten Commandments to a contemporary setting:

The ten commandments are an ancient human invention, not a divine one. The same goes for Satan, who emerges from a figure with the title “the Accuser” (ha-Satan in Hebrew) and develops into a rebellious angel, before becoming a figure who stands as a symbol for individualist and capitalist selfishness in the hands of Anton LaVey, and more recently as a teacher of empathy and compassion in the hands of The Satanic Temple.

Figuring out just what the continuing significance of the Ten Commandments is in the modern world, and who it applies to, is by no means a simple task. As James suggests, it's an ancient code. And I would suggest, it represents not the "divine word" on every dimension of human behavior, but rather a very human attempt to translate and understand what they felt God was calling them to do and be in their own specific time and place. It's also not at all clear to whom the Ten Commandments was intended to apply. Certainly it can be read as a set of universal moral principles, but it's far more likely that it was originally understood by the Israelites to embody their specific and particular covenant with their God. Thus, while one can glean universal moral principles from it (e.g., don't murder, don't steal again), that was probably not how it was originally intended.

As a Christian ethicist, a large part of what I do is attempt to understand just what the continuing relevance of the Christian tradition is to the moral problems facing the world today. The Bible is one of the sources to which I refer, not because it presents me with a list of infallible moral rules, but because I understand myself to be attempting to follow in my own context the same God that Jesus followed, and that the ancient Israelites followed in their own times and places. And just as the Biblical law was reinterpreted and reunderstood in different contexts throughout the Bible, so too we need to understand how God is speaking to us in this time and place, and what God is calling us to do and to be here and now. We read the Bible, not because it gives us answers, but because it helps us understand how others have framed the question, in confrontation with the same God we seek to follow.

[The Seven Precepts are] less about mocking (in my opinion) and more about how these values, which were essentially whipped up in a hurry, seem to contain more compassion than a list where nearly half of the commandments require everyone worship a particular deity and has been used by politicians to push Christian beliefs into policy decisions.

The "Satanic" aspect is the least important part. It could've been written by some dude in his basement. The point is: If it's so easy to come up with a set of worthwhile values, why do some people insist on putting up the Ten Commandments on public property instead?

Now, on the one hand, I'm no more in favor of attempts to plaster the Ten Commandments in every conceivable place than Hemant is. I tend to think they serve the same civic function as other ancient codes of law do -- to remind us that we are law-giving and law-obeying people. This, I take it, is the reason why it's carved on the Supreme Court building: Not because it's intended to be the foundational law of a democratic republic (which it emphatically is not), but because it represents a paradigm case of "law making as civilization making" and helps to remind us that we are a nation of laws. This is a far cry from the conservative Christian attempts to emblazon them everywhere as a testimony to the fact that we are a "Christian nation" (funny though, they aren't nearly as eager to do that with the Beatitudes).

However, I think Hemant doesn't really realize the import of what he's saying. Of course a set of moral precepts designed by modern, western, secular people (whether "whipped up in a hurry" or not) is going to appeal to modern, western, secular people. These rules are less normative in that sense than they are descriptive. They tell us what we as a liberal society already believe (and again, this has quite literally nothing to do with Satan, as he himself notes). It's not much of a moral challenge to tell people to do what they are already inclined to do anyway. For those of us who believe that we are called to a morality that transcends mere attempt to reflect who are are back to ourselves however, there is a much greater challenge: To try and relate our moral responsibilities here and now to the transcendent reference point that we strive to approximate in our specific time and place, and who we believe is testified to in a set of texts that is emphatically not of our time and place.

How this is to be done is not an easy task, and it's not a task that I need the Satanic Temple or Hemant Mehta to sign on for. But for me and those who work within my tradition, it is the central moral task, and again I would simply define it in this way (following James Gustafson): "What is God enabling and requiring us to do and be in this particular time and place."

And if I were to reconfigure the Ten Commandments in such a way as to help me answer that, I could certainly not do better than the words of Jesus: "To love God above all things, and to love your neighbor as yourself."

Posted at 11:23 AM in Ethics, Religion, Society, Theology | Permalink