Who Is Burning Black Churches 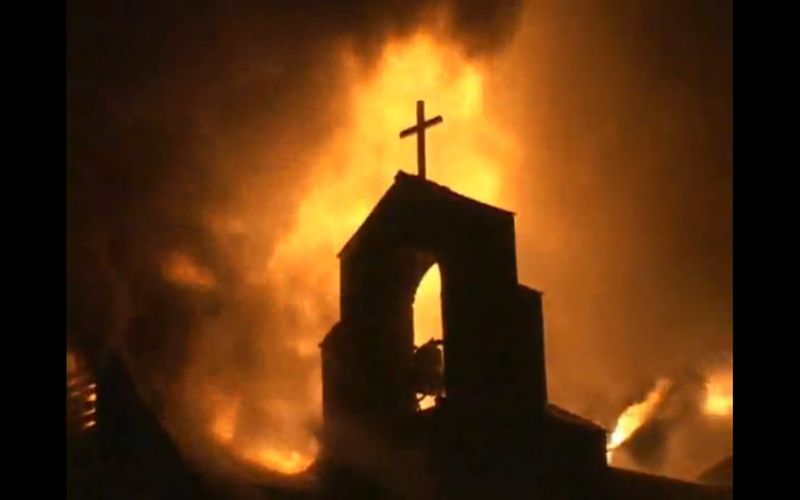 The assassination of Clementa Pinckney and eight members of his church at Emmanuel AME Church in Charleston, S.C. two weeks ago seemed, for a fleeting, almost indiscernable second, to be a wakeup call to America to finally take the reality of violent racism seriously. The multiple murders of young, unarmed black men by police in recent years didn't do it. The acquittal or refusal to indict those police didn't do it. The many examples of day-t0-day racial disparities in the United States has failed to do it for decades. But this singular, vile, shocking act seemed to rouse even some conservatives from their dogmatic slumber of racial ignorance.

This was most clearly manifested in the widespread calls to remove the Confederate Battle Flag from places of prominence around the country, and particularly from government buildings and property, as well as some genuine conversation about the ridiculous and insulting honor that we bestow on the the Confederacy, which was, not to put to fine a point on it, an act of treason undertaken for the sake of preserving slavery.

Yet, it should not be surprising to see that this moment of clarity has begun to produce its inevitable backlash, as the forces of racism have returned to the same tactics they've been using since Reconstruction to attempt to put African Americans "back in their place." This has been seen in the rash of "pro-Confederate flag" events taking place around the country in the past week, but it has been most obvious in the series of African American church burnings that have taken place since the Charleston attacks. This has led to the emergence of the #WhoIsBurningBlackChurches hashtag on Twitter, but thus far, has not been met with a satisfactory answer.

Here is how The Root summarizes the current situation:

Since the June 17 killing of nine people at Emanuel African Methodist Episcopal Church in Charleston, S.C., six predominantly black churches in the South have burned in the past week, including one on Tuesday, causing many on social media to wonder#WhoIsBurningBlackChurches. (Fires have also hit two other churches—College Heights Baptist Church in Ohio and Fruitland Presbyterian Church in Tennessee—but neither is predominantly black.) As of right now, three fires at black churches in three states—Tennessee, Georgia and North Carolina—have been confirmed as arson. Three other church fires are under investigation.

While there are still many questions unanswered, Mark Potok of the Southern Poverty Law Center suggests that this may be a violent backlash to the renewed attention to racism in the country:

“We’re in a very intense moment in which one man has tried to start a race war,” Mark Potok, a senior fellow at the advocacy firm, told The Daily Beast. “We’re looking at the possibility of a violent backlash building.”

“Certainly we don’t know that they were hate crimes…but it’s possible one or more of these were responses to the defeat of the Confederate battle flag or white supremacists hoping to further the race war Dylann Roof wanted to start,” Potok added.

Whatever the final outcome of these investigations turns up, this, coming on the heels of the murders at Mother Emmanuel Church, demonstrate that there is still much work that needs to be done to heal the wounds of racism in this country. But this will only be possible if we face the reality of it squarely and honestly, and refuse to give aid and comfort to those who want to preserve either the symbols or the social conditions that have emerged from and continue to contribute to racial hatred in the United States.