« Who Is Burning Black Churches | Main | Marriage Equality, Civil Marriage, and the Role of Clergy » 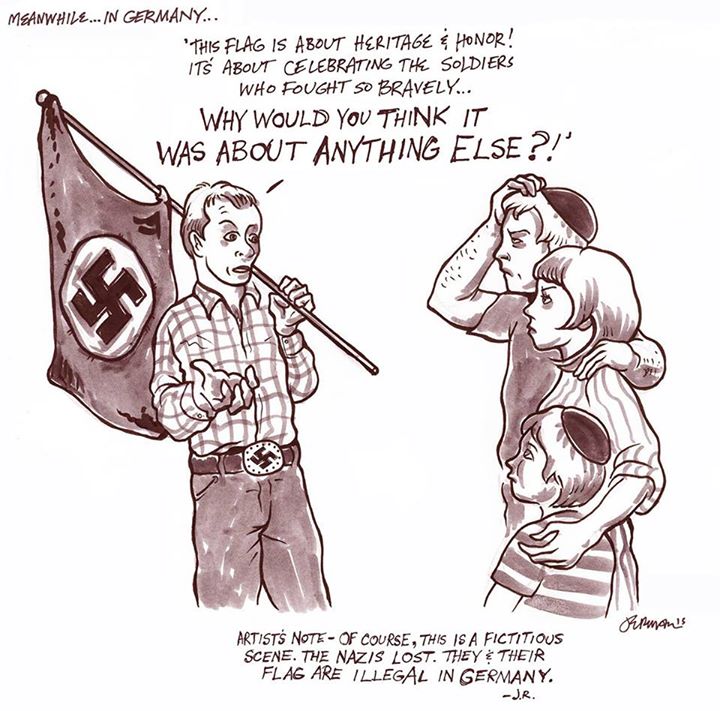 In yesterday's Washington Post James W. Loewen made the argument that one of the reasons why the South gets such a pass for its act of mass treason and support of slavery is because, to a large degree, it's won the war of memoralization. Monuments throughout the South (and indeed, even in some non-Southern, non-Confederate states) memorialize the Confederate cause and celebrate the heroism of southern soldiers, while nothing comparable exists to recognize the Union.

As soon as Confederates laid down their arms, some picked up their pens and began to distort what they had done, and why. Their resulting mythology went national a generation later and persists — which is why a presidential candidate can suggest that slavery was somehow pro-family, and the public believes that the war was mainly fought over states’ rights.

The Confederates won with the pen (and the noose) what they could not win on the battlefield: the cause of white supremacy and the dominant understanding of what the war was all about. We are still digging ourselves out from under the misinformation that they spread, which has manifested in both our history books and our public monuments.

It's a very strange historical phenomenon. I can't think of any other examples where the losers in a conflict, particularly the losers in support of one of the most genuinely terrible causes anyone has ever lifted a rifle to fight to defend, got to subsequently define the nature of the conflict.

Loewen offers numerous examples of how neo-Confederates redefined the conflict in its aftermath, constructed memorials on their own behalf, and then rewrote the history of the conflict in their own interest, and how they were allowed to do so by a nation that apparently lacked confidence in the moral value of its own victory.

Despite such statements, during and after the Nadir, neo-Confederates put up monuments that flatly lied about the Confederate cause. For example, South Carolina’s monument at Gettysburg, dedicated in 1965, claims to explain why the state seceded: “Abiding faith in the sacredness of states rights provided their creed here.” This tells us nothing about 1863, when abiding opposition to states’ rights as claimed by free states provided South Carolinians’ creed. In 1965, however, its leaders did support states’ rights. Indeed, they were desperately trying to keep the federal government from enforcing school desegregation and civil rights. The one constant was that the leaders of South Carolina in 1860 and 1965 were acting on behalf of white supremacy.

It's always been a genuine mystery to me why we allow this. One friend of mine pointed out that, while he has no truck with the ideology of white supremacy, nor does he support in any way the symbolism or false history portrayed by neo-confederates, he can recognize and honor the heroism and sacrifice of individual soldiers, who were often pressed into service against their will, didn't support the Confederate ideology, and didn't own slaves. And certainly, on an individual level, any soldier, forced into a conflict, who fights because he believes he must, whether out of a sense of honor, patriotism, or fear, deserves our sympathy. But these are tragic figures, not heroes, and particularly not when they fight, willingly nor not, for an evil cause.

I am currently reading the memoirs of German theologian Jurgen Moltmann, who was drafted into the German army in the final days of World War II at the age of 17. During his stint in the Army he was unwillingly pressed into the service of the Nazi state, yet he served both because he felt it was his obligation as a German and because he felt he had no choice. Yet, in the aftermath of the war, he did not choose to hide behind an ideological justification for what he did, supporting some sanitized version of "German Nationalism" to justify the war in a way that elided the horrors of Nazism. In the aftermath of the war, that was impossible. The reality of the Holocaust was too apparent to the entire world to make such a retreat viable, even if he had wanted to do so. Of course, Germany as a whole went through a long period of national silence and denial in the aftermath of the war, but the subsequent generation did not go easy on its parents when, in the 1960s, the truth of German atrocities was confronted directly. There is no reason why, 150 years later, we shouldn't (finally!) confront the reality of slavery and its legacy as squarely.