Marriage Equality, Civil Marriage, and the Role of Clergy 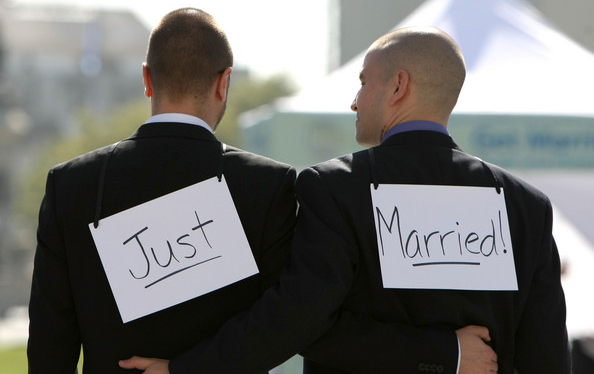 American marriage is a strange thing: On the one hand, we are a country that formally recognizes a separation of church and state, and which has no established religion. On the other hand, clergy are somehow authorized to act as agents of the government when they perform marriages and sign marriage licenses.

When I was a student at Andover Newton Theological School in the mid-1990s, the paradoxes of this position were already apparent, in part because the United Church of Christ at that point would often bless same-sex marriages which were nevertheless not authorized by the state. These "marriages" were not legal as a matter of law, but were solemnized by ministers as a way of celebrating the union. At the time, this seemed completely sensible to me. I couldn't understand how it could be that clergy were officers of the state with regard to marriages, particularly when there was a whole subset of the population that we were legally not permitted to marry, but whom many of us believed deserved to be married. Why not, I wondered, simply make this the standard: let the state offer legal marriage and the clergy offer whatever form of solemnization seemed appropriate to them.

Of course, as with many of my good ideas, I didn't write it down and publish it when I had the chance, and circumstances changed underneath me. Now of course the situation has changed. Marriage equality is the law of the land in all fifty states, and it is now conservatives who are arguing that clergy shouldn't be in the business of signing marriage licenses.

This doesn't really change my position, because even though on those rare occasions I've performed weddings, I've gone ahead and signed the marriage license, I still maintain this isn't the proper role of a minister. However, others have made that argument much more fulsomely than I ever have, including Tony Jones, whose book There Are Two Marriages makes the theological case for the distinction between marriage as a function of the state and marriage as a theological reality.

Jones was featured in an article recently in the Chicago Tribune about this convergence in attitude between liberal and conservative clergy on this issue, along with Orthodox and Catholic clergy who are beginning to take the position that, in a world of marriage equality, they'd just as soon not be in the marriage business any more thank-you-very-much.

I've never felt comfortable acting as an agent of the state in the act of marrying people, and I can only hope that, as time goes on, we can begin as a society to more fully embrace the idea, already quite common in Europe (in which, strangely, clergy often are agents of the state) that civil marriage is one kind of thing, and ecclesiastical marriage another.