Has the "Niebuhr Moment" Passed? 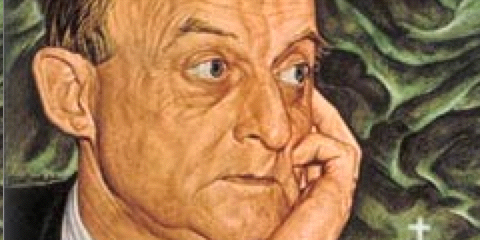 Matthew Sitman, guest blogging at Andrew Sullivan's The Dish, asks whether the Niebuhr moment has come and gone, under the title "Where Have You Gone, Reinhold Niebuhr?"

Oh how I remember those heady days when everyone was writing about and discussing Reinhold Niebuhr, the American theologian famous for books like The Nature and Destiny of Man and The Irony of American History, the preacher who taught us how to think about the Cold War. As a graduate student immersed in Niebuhr’s work around this time – the “Niebuhr moment” probably peaked in 2007 or 2008, but his specter loomed over many of the arguments about the invasion and occupation of Iraq – I had the rare pleasure of feeling like my labors in the stacks really connected to contemporary debates. For once, a preoccupation with theology was cool.

In the years since, he argues, the theological "coolness" of Reinhold Niebuhr seems to have faded. Where once Paul Eli quipped that "a well-turned Niebuhr reference is the speechwriter’s equivalent of a photo op with Bono" now he is seldom invoked by the high, the mighty, and the powerful in support of their arguments. Sitman diagnoses the reason:

Part of Niebuhr’s post-9/11 popularity, I would argue, was the compelling way he connected Christian theology to modern political problems. He could use original sin to diagnose American democracy, or discuss the coming of a world community as embodying Christ’s love. He wrote about war and peace while drawing on figures ranging from St. Augustine to Abraham Lincoln. Niebuhr was no mere pundit; his writing had a depth and seriousness notable in his own day and even more rare in ours. And when we found ourselves struggling to understand how to make our way in a newly terrifying world, we turned to Niebuhr as both a model and a resource.

But as Elie points out, there were elements of Niebuhr’s thought that seemed to support, or could be wrenched into supporting, nearly every imaginable position regarding the war on terror and, especially, regime change in Iraq. Which is another way of saying we found in Niebuhr what we wanted to find, all while enjoying the heft he gave our own ideas. The way we read him confirmed our preexisting inclinations more than it provoked us to think deeply and creatively – his work should have been, but wasn’t, a mirror in which we were forced to take a long hard look at ourselves and confront our fallibility and pride, to question our assumptions and cherished certainties.

Niebuhr, Sitman argues, wants us to turn our critical gaze away from our perceived enemies in order to recognize our own flawed and partial perspective, the way in which we are complicit in the evil we suffer, and how we suffer from the evil we inflict. The binaries of absolute good and evil have little place in Niebuhr's theology and ethics, even has he is deeply cognizant of evil's reality, and the need to respond to it forcefully, even when doing so embroils us in the ironies and the tragedies of participation in an imperfect and fallen world. As a result, in responding to the evil of others, we are tainted with evil ourselves, yet we mask our own evil in the mantel of purity and righteousness. The last thing we want to do is examine our own motives and justifications.

This failure to understand, and willingness to appropriate, Niebuhr's theology was most clearly and egregiously demonstrated by the way in which some thinkers, most notably Jean Bethke Elshtain, used him to justify the War on Terror and, worse still, the Iraq war. While it is imaginable, and even likely, that Niebuhr would have counseled the need for some form of military response to the 9/11 attacks, Elsthain's Just War Against Terror is  a model of exactly the kinds of self-righteous moral blindness of which Niebuhr was most critical. While he may indeed have had harsh words for those who would have advocated passivity in response to the attacks, he would have been no more tolerant of those who refused to consider the way in which history, and our complicity in the  chaos of Middle East politics, contributed to the "blowback" that 9/11 represented.

In the case of the Iraq war, there is little to be found in Niebuhr to justify the idea that he would have supported such a foolhearty and disasterous adventure. The closest analogue would be his resistance to the Vietnam War, to which the Iraq debacle is the closest historical analogue. The way in which he was appropriated for the purposes of supporting it can only be seen as a willful distortion and misreading of his thought.

The problem, however, is that Niebuhr's thought is complex. He did not simply have one position that he maintained continually throughout his career, and so there are bits of his writing that can be interpretated to support neo-conservative positions, other bits that can support the "chastened Liberal  Hawk" position that Sitman refers to, and still others that would support the kind of deeply critical perspecitve brought by the anti-war left, particularly around Iraq. The reason for this is that Niebuhr's theology was deeply contextual and responsive to the particular situations he was addressing. It is not even clear that one could speak of Niebuhr's Christian Realism as a "method" so much as a mood or attitude. It was a way of approaching controverted issues at the junction of religion and public life that depended not so much on following a series of steps from premises to conclusions as recognizing the limited and ideologically conditioned character of one's own perspective, and being cognizant of the relativity of all possible real-world solutions.

Sitman seems to think this as well, as he argues that the biggest problem with the way we approach Niebuhr, is that we pillage him for our purposes, and leave his deepest insights into human fallibility behind:

there were elements of Niebuhr’s thought that seemed to support, or could be wrenched into supporting, nearly every imaginable position regarding the war on terror and, especially, regime change in Iraq. Which is another way of saying we found in Niebuhr what we wanted to find, all while enjoying the heft he gave our own ideas. The way we read him confirmed our preexisting inclinations more than it provoked us to think deeply and creatively – his work should have been, but wasn’t, a mirror in which we were forced to take a long hard look at ourselves and confront our fallibility and pride, to question our assumptions and cherished certainties.

The more I’ve considered Niebuhr’s work the more I’m convinced that’s what he calls us to, and what we resist. Once we had rummaged through his work for polemical purposes, we left him behind, refusing to grapple with the most enduring elements of his thought. Niebuhr saw the self-interest lurking behind every argument, understood self-deception to be perennial, grasped that nothing in this world was pure. He should have been used not to endorse this or that particular position, but turned to as a prophetic figure who calls all of us acknowledge what, in a different time, we’d have called our sinfulness.

And for that reason it has become less and less useful for powerful figures to utilize Niebuhr for their own purposes. Perhaps the apex of Neibuhr's influence was Barack Obama's Nobel Prize Acceptance Speech, which was deeply enmeshed in a genuinely Niebuhrian analysis, without once simply dropping in a Niebuhr quote for the sake of establishing his intellectual cache. For those who knew Niebuhr, the connection was clear without his name needing to be said. Of course, what we make of that depends a great deal on whether or not we think Obama's foreign policy has been a (relative) success or failure.

Yet the decline of "Niebuhr chique" is not necessarily a bad thing. Overuse of Niebuhr is just as unhelpful as underuse, and the way in which he was misused over the last decade might indeed cause those who find him to be an important and necessary figure for thinking about the role of religion in public life to breath a sigh of relief that he's not as present as he was. But at the same time, I believe that his influence will be longer lasting, if subtler, than Sitman seems to. But I think that Niebuhr's famous words (which Sitman also endorses), speak most powerfully to his lasting influence: