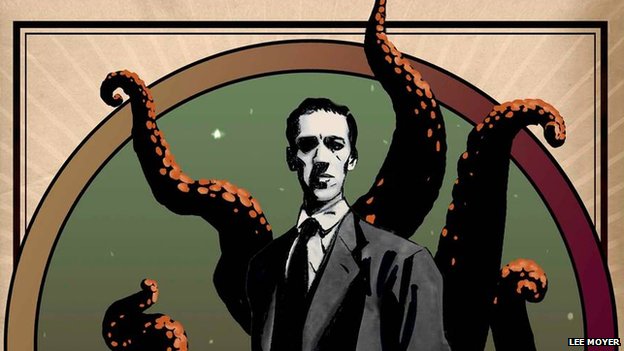 I am a major H. P. Lovecraft fan, and have been since I first discovered his writing during my freshman year in college. Since then, I've read a ton of things both by Lovecraft and in the Lovecraft vein of weird fiction and cosmic horror. It's hard to deny his influence on English literature and culture, which can be seen in everyone from Stephen King, Charlie Stross, and Niel Gaiman to TV shows like True Detective and the Hellboy movie franchise. Heck, he even makes an appearance in the Mountain Goats' song "Lovecraft in Brooklyn."

But, H. P. Lovecraft has a big problem, one that is difficult (probably impossible) to divorce from his writing, and that problem is this: Lovecraft was horribly racist. And not just racist in an "I am unaware of white privilage" sort of way. It was deep in his marrow, and all over the place in his fiction, as David Nickle argues:

I'd make the case that Lovecraft's fiction--and Lovecraftian horror--depends on the xenophobia that was endemic to Lovecraft's work to the point that without it, many of his stories lose their unique and uniquely profound effect.  "The Horror in Red Hook" is a direct channelling of Lovecraft's loathing of newcomers to New York City; the real horror of "The Call of Cthulhu" is not the octopus-headed demigod that emerges out of his underwater city to kill all the people, but the people themselves--all either eugenically unfit denizens of the bayou or "primitive" island cultures whose religious practises amount to a kind of proactive nihilism.  The manifestation of Nyarlathotep in the eponymous story is that of a black man bearing trinkets, who seduces the good white folk of America into authoring their own demise.

There are other things going on in Lovecraft too: there's the bestiary/pantheon of fantastically alien gods and monsters; that overheated prose that veers so easily between the sublime and the leaden; his fearful, bookish characters. But those are characteristics, aesthetics; not fundamentals. They are not the agenda.

The agenda in Lovecraft's fiction is clear, and woven deep into the bones of his stories.

The problem Nickles confronts in his essay is how it is possible to recognize Lovecraft's contributions to science fiction, fantasy, and horror while at the same time naming and critiquing his racism. What's more, he asks, how can we write "Lovecraftian" fiction without falling into the same racist and xenophobic traps that Lovecraft did. He suggests that it's possible, though it leaves a lot on the table:

Charles Stross has good fun with Lovecraft's Cthulhu Mythos in his Laundry books, without appearing to draw on anxiety much deeper than a solid recollection of a bad time working I.T.  Where Stross blends espionage adventure with the Mythos, Laird Barronblends noirish elements with pseudo-Mythos tropes to explore themes that are nearer to Jim Thompson's brand of nihilism than Lovecraft's. Thomas Ligotti cheerily swaps out xenophobia for all-out misanthropy.

Nevertheless, he argues, that still leaves a lot of material to mine:

For me, the xenophobia angle remains the most interesting, and perhaps the most relevant. The legacy of racists like Lovecraft is still very much in play in contemporary society, from the Obama birthers to the Ferguson cops and most points between... and the discussion as to how to contain that legacy is far from over. In a perverse way, Lovecraft's retrograde views on race may be his most socially relevant contribution to 20th century weird literature... not as an advocate of his views, not by any means, but as an example of where we've been and what too many of us still share, an opportunity to critique those views through the lens of cosmic horror and alien gods.

Indeed, it seems, as Nickle suggests, that the best way to call out Lovecraft's racism is to write fiction that places that dimension of Lovecraft's mythos out in the open as an object of critique and ridicule, as I think was at least partially done in True Detective and as I think Stross explicitly does, for example, in The Jennifer Morgue where one of the main characters is a Deep One who has to mask her true identity to "pass" in a human world.

Regardless, Nickle's raises some interesting and important questions, and what's more, he points out that this is something that Lovecraft fans are reluctant to deal with, but which it is vitally important that they address. It's one thing to admire Lovecraft's work. It's another thing to give him a pass on his genuinely vile racial politics.