Game of Thrones and the Spiral of Violence 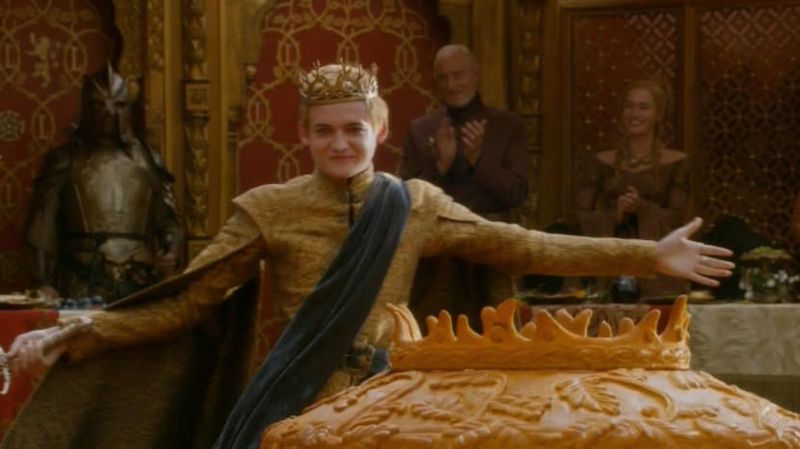 So, let's talk about what happened on Game of Thrones last night. Let's explore our feelings, shall we? open up, and tell the group all about our reactions to the Purple Wedding. I'll go first (warning: Spoilers ho!)

So, I have to admit, I knew it was coming. I've read the books. Twice. In fact, I've been looking forward to watching Joffrey Baratheon/Lannister choke to death at his own wedding pretty much since the whole "Lion's Tooth" incident in season one). And this leads me to the troubling reality: I enjoyed watching Joffrey die.

I have enjoyed very little of the death on this show. I didn't enjoy them in the books either, but the show goes out of its way to demonstrate that these deaths are horrible, painful, shameful and immoral, and that, what's more, this is the reality of war. This is what war is. War is the organized pursuit of horror, death, and destruction. It's not romantic. It is not glorious. It is not what the Knights of Summer believe it to be. It is, in the end, the death of honor, not a manifestation of it. And Martin and the producers of Game of Thrones have done a painfully effective job at conveying that message. Repeatedly.

They have also demonstrated the idea that politics is, far too often, war carried on by other means, and thus only barely sublimates the brutality of war within the putatively peaceful conventions of diplomacy and political jargon. The threat of violence always lurks not particularly far from the surface of political life, and the main dispute is over the question of who gets to claim the right to weild violence under the veil of legitimacy. But again, as Martin has repeatedly demonstrated, ultimately all of the legitimation stories told by kings and princes rest on the fiction that their effectiveness at deploying violence in the interest of seizing power conveys the right to weild and control it. The Targaryans became the rulers of Westeros because of their military superiority (in the form of their dragons). Robert's rebellion established him as the King, not because he had proven some principle of legitimacy, but because he effectively murdered all who had a greater claim to the throne than himself. And after his death, all the War of the Five Kings demonstrated is that "king" is just the name we given to the last thug standing.

So, the question lingers: Can we overcome this cycle of violence, or is society ultimately condemned to base itself on the ability of one party or another to establish itself through the tools of violence, and then deprive others of those same tools? Is there a way in which authority and legitimacy can be established through nonviolence, or must violence and the threat of violence always be the ultimate trump card in any political dispute.

There are, of course, other models. One can look to India, or South Africa, or the civil rights struggle in the United States. It should be the case that legitimacy is rooted in an authentically moral standpoint which is able to pursuade the bulk of the population to either agree or at least acquiesce. Unfortunately, even in circumstances where legitimacy can be established on that basis, it often still must defend itself from illegitimate violence through resort to violence itself.

But, I also cannot escape the violence within me. It's not just governments, societies, and institutions that find a too-easy resort to violence. As individuals, violence is often our first order respons to conflict. And even when we do not actually act on our instinct to violence, it lies just beneath the surface. And so, when someone as legitimately hateful as Joffrey finally gets his comeuppance, I cheer with joy along with the entire rest of the viewing audience.

And it is for this reason that Kierkegaard once stated that original sin was the one empirically verifiable doctrine of the Christian faith.