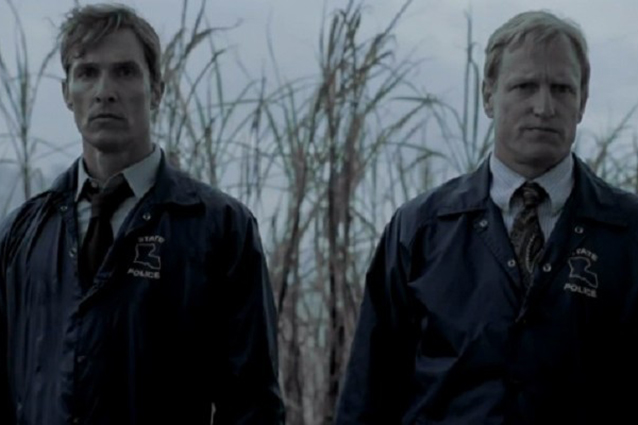 Well, I am completely unsurprised that my prediction about the outcome of this first season of True Detective was completley wrong. What we got, instead of a grand conspiracy and cosmic moral horror, was ultimately a relatively conventional serial killer drama, with a philosophical and moral cherry on top.

I have to say that I am fairly satisfied with the conclusion of the season. While it would have been interesting to see the detectives uncover some massive conspiracy that affected the entire religio-political Tuttle dynasty, I think that once they established Errol as a convincing villain (which really took all of five minutes at the beginning of the episode, thanks to tremendously creepy acting on the part of Glenn Fleshler), I was content to let the story spin in the direction Nic Pizzolatto wanted to take it. What the ending lacked in socio-political scope it more than made up for it in terms of setting and characterization. It left a lot of questions unanswered, but it answered the one that it set out to in the first episode: Who Killed Dora Lange?

But what I found more interesting than that was what it chose to do with its two protagonists. Having thrown them together as a mismatched investigative team, established that they never liked one another, and then given them plenty of reasons to actively hate one another, it then threw them back together again in the last two episodes, and by the end, transformed them into genuine friends, albeit in a very fragile friendship.

But Marty and Rust always also represented two opposing worldviews. Marty represented faith in order, law, family, and tradition, while Rust stood for chaos, anarchy, and dissolution. I had assumed from the start that, when push came to shove, the show would ultimately side with Rust's nihilistic viewpoint, particularly having exposed Marty's hypocrisy repeatedly. I never expected any genuine supernatural form of cosmic horror. I didn't really expect Cthulhu to rise from the depths and devour them, or the King in Yellow to descend from Carcosa in the form of the Living God. But I did assume that, at the end of the story, all of Rust's philosophizing would pay off in an image of a world in which all morality, all love, and all order are but convenient illusions, easily stripped away, and impossible to replace.

But the show went in exactly the opposite direction. It stuck to a rather conventional conclusion in which the bad guy is put down, order is restored, and hope rises from the ashes of despair. Despite everything the show had foreshadowed, Rust ends up alive at the end. What's more, he begins to climb out of the dark pit into which he had fallen after his daughter's death, and begins to see that there is light in the world. Not much perhaps, but enough to be worth fighting for. There was even some hint, faint though it was, that Rust begins to see some hope of reunion with all of those whom he has lost on the other side of death. I wouldn't want to read too much into that, but it certainly seems to be there.

At the same time, the show also restored to Marty everything that he had lost. His heroism and his brush with death opens a door to a renewed relationship with the family he had neglected and alienated. While all is not restored to the status quo ante, nevertheless, the final scene in the hospital with his wife and daughters suggests that there may indeed be hope for renewal there as well. Unlikely though it may be that Marty will reunite with his wife, who clearly long ago moved on, there is still the possibility that he will be able to have a real relationship with his children, and a genuinely caring relationship with his ex-wife.

Again, all of this is signaled in brief scenes, and one conversation between the two men at the end. I woudln't want to make a mountain out of that particular molehill. But it seems quite clear that, in the battle between order and chaos, Pizzolatto and company put their markers down, if only at the very last moment, in favor of order, and the possibility, though faint, of the restorative power of love.