On the Occasion of Fred Phelps' Death 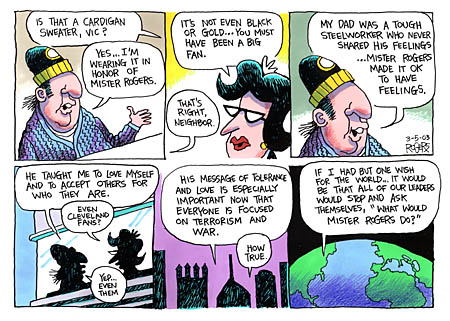 Notorious bigot and protester of funerals Fred Phelps died yesterday and ... well, I don't really have anything to say about it. Phelps apparently died as a pathetic husk, hatefully rejected by the very community that he taught to hate. And lied about to the end by the community he taught to lie. There is really no commentary that can add to the sadness and irony of that fact. Best to let him slip into obscurity.

In that vein then, I'm going to follow Slacktivist's lead and use the occasion to remember another, better Fred. A Fred who was also a minister, but who understood that Christian ministry was about showing for the love of Christ in a broken world rather than preaching hate. A Fred who, during a childhood when I believed I was nothing but a freak, told me that he liked me just the way I was.

And as Slacktivist (who is also another Fred) reminds us, he also said this:

For me, as for all children, the world could have come to seem a scary place to live. But I felt secure with my parents, and they let me know that we were safely together whenever I showed concern about accounts of alarming events in the world.

There was something else my mother did that I’ve always remembered: “Always look for the helpers,” she’d tell me. “There’s always someone who is trying to help.” I did, and I came to see that the world is full of doctors and nurses, police and firemen, volunteers, neighbors and friends who are ready to jump in to help when things go wrong.

… To this day, especially in times of disaster, I remember my mother’s words, and I am always comforted by realizing that there are still so many helpers — so many caring people in this world.

I am fortunate to know many helpers. Too many to name. But I hope you all know who you are and know I value you.

So, here's to Fred Rogers, and here's to the helpers. May their tribe increase!