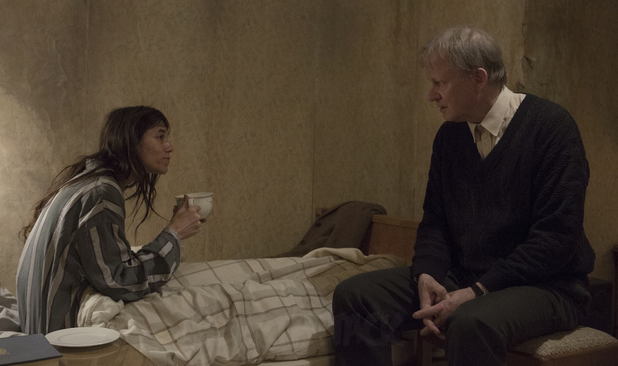 Moving up the ladder of the cinematic artform, I suppose it's time to turn my attention to Lars von Trier. I actually hadn't been planning to write about his new movie, Nymphomaniac, since it really didn't sound like my cup of tea, and having chosen to skip Anti-Christ and Melancholia (which is, however, on my Netflix cue), I figured this was a movie I could let pass without too much difficulty.

But then I read this fascinating article in Tablet, arguing that Nymphomaniac is, far from being pornography (despite the graphic sex), actually a defense of Jewish theology. Here's what the article states:

That the only path Joe knows to her soul passes between her legs has everything to do with her religious ideas. As he had in the past—most notably in Antichrist and Melancholia, his two previous films—von Trier is arguing here that our thirst for transcendence, our desire to rise above the brutishness of the human condition, can only lead to disaster. We may yearn for love, but we can’t handle love. It’s too wild, too mad, too incandescent for us to contain. As is faith. As is guilt. As is any other human emotion worth experiencing—we can never forsake them, and yet we must never attempt them in too great a dose. Only Christ can climb the mountain and radiate with divine light; if we mere mortals tried the same trick, we’d likely burn away.

The alternative to Christ is Seligman. A perfect embodiment of Jewish eschatology, he believes, like the sages of old, that there aren’t any fundamental differences between our own time and the days of the Messiah to come and that all attempts at redemption must focus not on some desperate thrust heavenward but on a series of small and incremental earthly steps. If you believe this—if you believe that everything you do is an important step toward salvation—interpretation becomes your steeliest sword. If you are your own savior, and if every one of your acts facilitates the saving, you are likely to read a lot into everything. That’s how we got the Talmud, the ultimate book of ordering the world, and that’s how we got a grinning Seligman, alone in his apartment with his books, trying to do the same.

Of course, von Trier has trod this path before. In Breaking the Waves, which I regularly use when I teach courses on religion and film, the protagonist uses sex as a means to express her faithfulness to God, and to demonstrate her desire to heal her husband. Clearly, for von Trier, there is a strong, though ambiguous connection, between sexual and religious fulfillment.

I can't imagine I'll be showing Nymphomaniac in my classes any time soon (nor Anti-Christ), but I would certainly suggest it as another exploration by von Trier of that mysterious and elusive connection between our physical and spiritual desires.