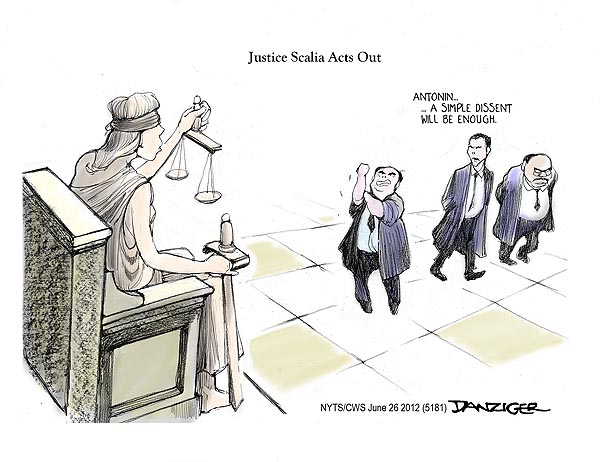 So naturally, as I could have predicted, Antonin Scalia showed his hand in oral arguments in the Supreme Court today, telegraphing his intention to vote against the Obamacare contraception mandate and invalidate his own earlier decision in Employment Division vs. Smith. Again, this is not a surprise, since it's well known that Scalia does not have a principled bone in his body. What particularly annoys me, however, his that he is masking his intention behind the "contraceptives are abortifacients" lie:

The Obamacare rule in question during arguments on Tuesday requires employer plans to provide 20 contraceptives, four of which are at stake: Plan B, Ella and two types of intrauterine devices (IUDs) without a co-pay.

"You're talking about, what, three or four birth controls, not all of them, just those that are abortifacient," Scalia said. "That's not terribly expensive stuff, is it?"

So, once more with feeling: These contraceptives are not, not not abortifacient. It's a lie to pretend that they are, and Scalia is using that lie in order to give himself cover for going against his own prior decision. Dispicable!