Evangelicalism as an Empty Signifier 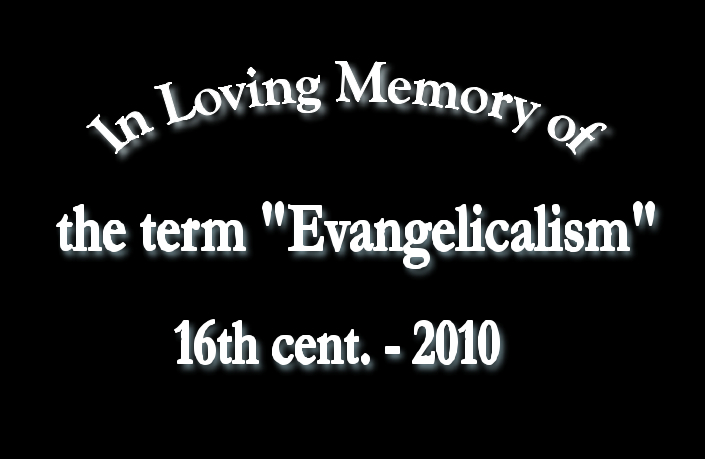 In the context of noting the ongoing arguments within evangelicalism about sexuality (this time occasioned by Arizona's rotten, no-good very bad proposed new law re-instituting Jim Crow laws, but this time for gays and lesbians), Tony Jones makes a very interesting point:

If we’re honest, we can acknowledge that “evangelical” is an empty signifier. The term is up for grabs. Some (McKnight) see it as a theological category; others (Moorohler) consider it a cultural/political category. The media tends toward the latter definition since they have a tin ear for theological nuance. And, as long as the term has no agreed-upon meaning, we will be trapped in arguments of incommensurability.

Of course, my first instinct is to say that, within Christian discourse, we should concern ourselves first and foremost with the theological categories, and eschew the cultural categories to the extent that we can, but it's obviously never as simple as that, as theological terminology is deployed within a cultural setting.

But this is an issue that I often think about with regard to what it means for me to identify myself as a Christian. It's been clear to be for as long as I've been protestant that, whatever kindof protestant I was, I was not an "evangelical" protestant. I was, rather emphatically, a "mainline" protestant, which I took to mean affiliated with historic denominations and theological schools of thought that extended back to the Protestant Reformation. Of course, in the lands of the protestant reformation, they don't use the word "protestant" to describe my theological and ecclesiastical outlook, rather protestants are called, in Germany, Evangelische. Evangelicalism as a separate category to describe relatively conservative, fundamentalist, and charismatic churches is a relatively new development, and seems to mostly be a phenomenon in the English-speaking world.

And so Tony's point is very well taken. I'm not evangelical because evangelical entails a certain set of theological or moral categories that I disagree with. Sometimes it does, but just as often it doesn't, and as younger evangelicals move away from the culture warrior pose of the Jerry Falwell generation, the fault lines between what constitutes properly "evangelical" Christianity and "mainline" Christianity will increasingly begin to fade. The term may not be quite the empty signifier that Tony suggests, but it is certainly a term under a great deal of negotiation. And what Jonathan Merritt, Rachel Held Evans, and many younger evangelicals embrace the term in a broad sense that includes gay, lesbian, bi-sexual, and transgender Christians, for some time to come, that view will remain at loggerheads with the view that imagines that no such broadly conceived conception of evangelicalism is possible.