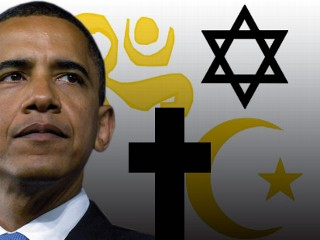 On Faith considers the way in which Barack Obama's appraoch to religion in public life has cleared a larger space in American civil religion for those of the "spiritual but not religious" and "none" persuasions:

Gone is the God of biblical revelation, the generalized God-as-Father-in-Heaven, and the distant God of Providence. Rather, Obama’s public God is a personal spirit, the relational presence of inclusion, community, empathy, irony, justice, and service. The God of this new and emerging American civil religion is a God who is with humankind, a far more embracing rather than judgmental figure, who loves and acts in the world through the works of human beings. Most theists can recognize this God (or gods) in their own religious traditions; most non-theists can interpret this sort of God as a spirit of beauty or justice in humankind.

Thus, Obama opened the theological door of American civil religion toward atheists and humanists as well as those who hold to more conventional faiths. This God may or may not be the God one chooses to worship at church or pray to at home, but this is a God (or “not-God”) who can function in the public square to bind Americans together with a larger sense of meaning and purpose.

It's an interesting analysis overall, and the conclusion is suggestive of the way in which Emile Durkheim understood religion as a reflection of social instincts projected into a symbolic space. It raises interesting questions about what, in a secular age, it means to have a civic faith that is no longer constrained by a dominant set of religious symbols, but can be welcoming of people of many and diverse faiths, and none.

Greg Boyd is an evangelical pastor, author, writer and theologian who has long been an advocate of a position called "open theism," which he describes in a guest post at Rachel Held Evans' blog as:

In a nutshell (and as he describes in the video above), the idea is that, in opposition the view that God knows the future as, in one way, shape or form or another, a set of certainties about how things might happen, open theism believes that God instead knows the future as the composite of all possible futures, and God's foreknowledge does not consist in knowing which of those possibilities will transpire, but which ones might transpire.

I think there are many attractive features to this view, and don't find it particularly controversial, even though I would probably pick at the details a bit (as I'll try to explain a bit below). But what's striking about all of this is the hostility that Greg has encountered within the evangelical community with regard to his views, having been condemned as a "heretic" on many occasions. As Greg describes it:

My first encounter with the “backlash” you mentioned took place in the mid-90’s when John Piper launched a public crusade to get me fired from Bethel University and to have my church kicked out of the Baptist General Conference  on the grounds that I was a “heretic.”  There were also attempts by some to force publishers to stop publishing my books and for Christians to boycott bookstores that sold them. Hundreds of pastors signed a petition to get me fired, with only one of them taking the time to ask me what I actually believed and why I believed it.

His own response is certainly more charitable than mine would have been under the same circumstances, and I am impressed with how intent he is on staying in conversation with and in membership among an those members of the evangelical community that are so intent on dismissing him.

For my part, I hav become weary of the kind of heresy mongering that I see going on so often in certain corners of the church. While I think careful reflection on the implications of our doctrinal positions is important, it is foolhardy to dismiss a well-reasoned position as "heretical" simply because it fails to conform to a prior position which has been widely accepted and perhaps even taken as "read" within the church. This is particularly irritating in the context of positions which, however much they may be argued for in the context of ideas about revelation, are really fundamentally speculative (such as the idea of God's foreknowledge of the future). In such circumstances, the standard should be whether such positions are internally coherent rather than on whether they conform to some prior interpretation of what is presumed to be "revealed."

But of course, I am not arguing this within the evangelical branch of Christianity. And compared to positions with which I am more familiar, Open Theism actually strikes me as being a rather conservative option, even as it's viewed by many evangelicals as being unforgivably radical.

For my money, Process Theology offers an understanding of God's being and action in the world that is far more radical than Open Theism endorses, and yet within the mainline Protestant branch of Christianity to which I belong, is widely accepted (even as it is often vociferously debated). Well respected theologians from Ian Barbour to John Polkinghorne and John Cobb embrace Process Theology without being ostracized from polite theological company. While I would snipe at process thought in much the same way that I would snipe at open theism, I still find it, like open theism, to be a perfectly credible set of theological proposals.

But of course my own theological disposition always drifts back to the perspective offered by Jurgen Moltmann, which has some affinities with both process theology and open theism, but is distinct from both. In particular, Moltmann's thought is, I would argue, less philosophically speculative than both of them, seeking conclusions that are less grounded in the terms of philosophical theology and more grounded in an analysis of how God should be understood on the basis of what is said about God in the Bible (and yes, I recognize that many open theists would say that they're doing that as well, but I have my doubts). In particular, I think Moltmann concludes not simply that God must necessarily foreknow all possible futures, but rather that God may indeed not know all possible futures. Rather, God's own self-limitation requires that we allow for the possibility that God may indeed be surprised by God's creation.

Faith in God, and in particular the idea that God is trustworthy in fulfilling God's covenant promises with regard to humanity and all creation, is not rooted in some prior philosophical declaration that God must do so. Rather belief that God will do so is rooted in a prior trust in God as the one who has made a promise and has come into intimate encounter with humanity in the person of Jesus Christ in order to both embody and fulfill that promise.

If faith in God depends, not on the narrative of God's promises and their fulfillment in the Bible, but rather on a philosophical doctrine through which that narrative is filtered in order to make it coherent, than it is less faith in the God who is revealed in scripture than faith in a philosophical construct that we mold our theology to conform to. None of which is to say that philosophical speculation on these questions isn't useful for clarifying the issues at stake and their implications.

Both process theology and open theism offer very important contributions to the conversation, and, once again, I find the heresy mongering deeply unhelpful. I would much rather have a conversation with a process theologian and an open theist, in an effort to allow each of our perspectives to illuminate the possibilities and limitations of the others, than seek to exclude in principle either perspective because it calls into question some prior model of divine being or action.