« Violence, Regionalism, and Religion in the U.S. | Main | Open Theism, Process, and Theology of Hope » 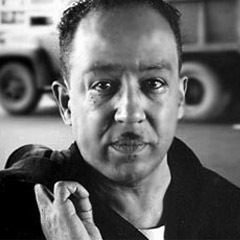 Wallace Best, at Religion and Politics makes an argument about Langston Hughes' poem "Goodbye Christ" and it's connection to the American liberal religious tradition. The poem reads, in part:

Goodbye,
Christ Jesus Lord God Jehova,
Beat it on away from here now.
Make way for a new guy with no religion at all –
A real guy named
Marx Communist Lenin Peasant Stalin Worker ME

Best argues that this poem should be understood, not simply as a rejection of religion in the name of communism, but rather as part of the tradition of "critique and complaint" in the African American Christian tradition.

With this concentrated look at “the culture of critique and complaint,” I place Hughes squarely in the context of American religious liberalism—not a rubric under which we have placed many African Americans or many expressions of African American religion. I make the claim that Langston Hughes espoused various tenants of religious liberalism and it is in this context that he and much of his writing on religion is best understood. ...

Hughes’s religious liberalism did not always contain the “optimism” characteristic of many religious liberals of the time, but it did have many other of the principal features, including individualism, ecumenism, cosmopolitanism, humanism, “a certain generosity or charitableness toward divergent opinions,” as Sydney Ahlstrom called it, a strong emphasis on the social (or practical or material) aspects of religion, ethics, and moral reform. It placed reason and experience over emotionalism put confidence in higher criticism and the scientific method. Just as crucial to Hughes’s religious liberalism was a desire to liberate himself from the creedal commitments that he viewed to be principally at the service of ecclesial and State power.

The poem haunted Hughes for years, and led, in part, to a humiliating interrogation before Joe McCarthy's communist witch-hunting "Permenant Subcommittee on Investigations," at which, after hours of questioning, he was forced to declare "I have never been a communist; I have never been an atheist."

In the end, Best argues, the poem should be understood as a critique of the corrupting power of capitalism on the Christian churches. He concludes: "Far from being a remote example of 'anti-religious' sentiment, the poem was integral to a culture of complaint and critique among clergy as well as lay people who implicated American churches for social inaction during the Great Depression"

Posted at 08:30 AM in Books, Political, Religion, Society | Permalink