« The Pill Is Not an Abortifacient | Main | Empathy and Social Change » 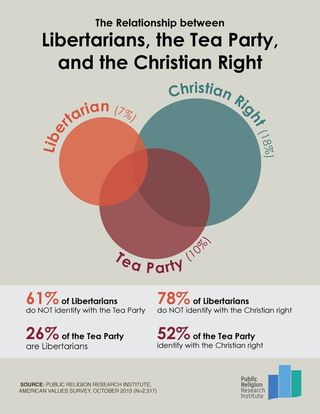 Yesterday the Public Religion Research Insitute published a study reporting on the presence of various ideological positions within the Tea Party (which I continue to insist is a stupid name, but I guess is better than their historical antecdents the Know Nothings). The major finding was that lbiertarians are actually not very well represented among the Tea Partiers, despite their rhetoric and reputation:

Libertarians also constitute a smaller proportion of the Tea Party movement than other core conservative groups. Aboutone-quarter (26%) of Americans who identify with the Tea Party movement are libertarians, compared to a majority (52%) who say they are a part of the religious right or conservative Christian movement, and 35% who identify as white evangelical Protestant.

As Ed Kilgore notes at The Washington Monthly, the Tea Party is dominated far more by theocratic conservatives than libertarians, though their rhetoric can be misleading:

Yes, a lot of Tea Folk use libertarian “don’t tread on me” language and insignia. But they’ve come to the ideology of the hard dollar and the minimalist state via David Barton rather than Ayn Rand: via a belief that absolute property rights (and for that matter, the rights of the “unborn”) were divine endowments to America as an “exceptional” nation directed by Providence. So they don’t “get” the idea that they harbor contradictory attitudes towards government on economic issues and social issues. To most “constitutional conservatives,” the property-owner and the patriarch of a “traditional family” are equally endowed by God and the very structure of the universe with powers that are perpetually endangered by God’s enemies operating through a secular-socialist State.

What this implies from a political perspective is that the dominance of the Religious Right in the Republican party has, far from waning, simply repositioned itself within a putatively libertaian interest group.  As a matter of policy, this reality is revealed by the degree to which Tea Party candidates, or those who use Tea Paty rhetoric to advance themselves, are likely to combine strongly libertarian (to a Ron Paul level of nuttiness) economic and regulatory policies with strongly authoritarian policies regarding individual privacy, specifically in areas of sexuality and reproduction.

And of course we've seen this playing itself out in state legislatures that are dominated by Republicans, where the initial promises are of loosening economic restrictions for the sake of creating jobs, but most of the legislative action has been take up with imposing new restrictions on abortion. Whether it's Michigan, Texas, Virginia, or half a dozen other examples, the pattern is the same -- libertarian rhetoric combined with authoritarian policy. For the super rich, of course, it's a great deal, since they get the benefits of lower taxes and less economic regulation, while at the same time being able to evade any inconvenient restrictions on their personal lives simply by virtue of being super rich, and having the mobility that implies.

For ordinary people, they simply continue to see economic stagnation and a growing gap in inequality, while at the same time watching their legislatures spend all their time trying to make abortions harder to obtain, banning contraceptives and requiring police reports for miscarriages.