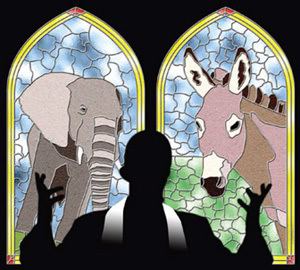 Bill Tammeus, reporting on an article by James Bennett, offers some interesting data on voting patterns in the 2012 election, and what they might portend for futur elecitons:

Bennett says that although people of faith seemed to vote in relatively traditional ways for these decidedly unconventional 2012 presidential tickets (there was no white Protestant on either ticket), the fact is that Hispanic Catholics and the religiously unaffiliated voted in ways that may shape presidential elections well into the future. (If he's right, it's more bad news for the Republicans, who in the last week seem to have created nothing but bad news for themselves.)

Hispanic Catholics, he writes, voted Democratic 75 percent to 21 percent in the 2012 presidential race. And the growing group of people who say they are religiously unaffiliated (now almost 20 percent of American adults) voted three to one for the Democratic ticket in 2012.

What does this mean going forward? Among other things, a diminishing of the overall relevance of religion in electoral calcuations:

the "subdued role of religion" in the 2012 election is likely to continue if, as was the case with Barack Obama and Mitt Romney, neither side sees any advantage in highlighting either his or his opponent's religious affiliation.

However, Bill offers an important caution:

Will religion continue to be essentially a non-factor in presidential races, as Bennett seems to suggest? I think it's quite probable, but as soon as analysts begin to discount or ignore the role of faith in presidential elections it will surface in unexpected ways to show such analysts are fools. That's why the best prognosticators in politics wait until after an election to describe why the results were inevitable.

Much like Mark Twain, the rumors of the death of public religion are frequently much exagerated. It keeps reentering the public discussion after each subsequent obituary. That said, however, the trends certainly seem to be pointing to a decreasing degree of relevance to specific religious denominations as a factor. I'm not sure that's really a bad thing.