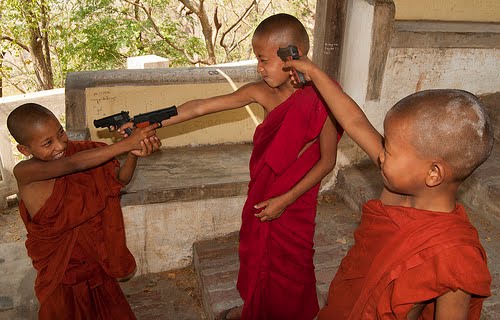 Monday's Navy Yard shooting once again draws national attention to the problems that attend the easy access that we have to fire-arms in the United States. The solutions to that problem are elusive, both because it's not immediately apparent that most of the proposed means of limiting access to guns would be effective at achieving the end of keeping them out of the hands of those who would use them to harm, but also because, regardless of the merits of any particular solution, the gun lobby has such a lock on the political discourse around guns that it's impossible to get any kind of meaningful legislation through Congress. In the absence of sensible national legislation, any form of piecemeal state or local legislation is unlikely to be effective.

But the tragedy also raises troubling questions about the way that we talk about religion and violence in the United States for an unexpected reason: The shooter was a Buddhist.

As Joshua Eaton notes at Religion Dispatches, many people are rushing to draw exactly the opposite conclusion about Aaron Alexis's relationship to his religion from the one that is drawn when a crime is committed by a Muslim.

Notice how different things are for our Muslim neighbors. In the popular imagination, Buddhism is a religion of peace and Islam is one of war. We may wonder how a Buddhist could commit such an atrocity—despite Buddhism’s history of violence in places like Burma, Japan, Tibet and Sri Lanka [see: Monks With Guns: Discovering Buddhist Violence, by Michael Jerryson in RD]. However, when the perpetrator is a Muslim we assume, as a matter of course, that religion was their primary motivation—despite the verses in the Qur’an that say murdering a single innocent person is the same as murdering all of humanity.

Of course, there is nothing to indicate that Alexis’ rampage had anything to do with his Buddhist practice. But even people who do commit atrocities in Buddhism’s name—the anti-Muslim monk Ashin Wirathu in Burma, whom Timemagazine called “the face of Buddhist terror,” may be the most famous example—often get the same treatment. Buddhists do not commit violence, it seems, therefore no one who commits violence can be a Buddhist.

To a large extent this public perception is rooted in the failure of most Americans to understand the complex relationship between corporate belief and individual action. As Eaton notes, there are examples of Buddhist violence for those who care to see it, and plenty of examples of Muslim peacemaking for those who want to acknowledge it. But once a perception of what a religion is gets locked into the public imagination, it can be very difficult to dislodge, and people will go to great lengths to preserve their preferred perception.

All of which points to the amorphous nature of religious action. As a motive, it never points in only one direction, but depends entirely on the way in which it is understood by the receiver. This is a point that the neo-atheists like Sam Harris and Christopher Hitchens always fail to recognize. The brutality of religious violence is rooted, not in the religion, but in the moral agent who uses religion as the motive to cause harm. Were we to live without religion of any kind, those inclined to violence would root their violence in some other ideology (as the Communist Party has demonstrated repeatedly throughout the world).

The question is whether those who believe in using religion for the sake of peace can make a compelling case for their alternative vision of religious truth. The evidence seems to be that Aaron Alexis was deeply mentally disturbed, and that his religion played no role in his pathologies, but even so, it is imperative that we be clear in any case where religion and violence are intertwined to attend to the agent and their actions. Religion in itself may or may not be a relevant vector for analysis, but one should assume that one knows all that is necessary about the agent and his motives once one knows what religion he was.