Reading The Bible Is An Art, Not A Science 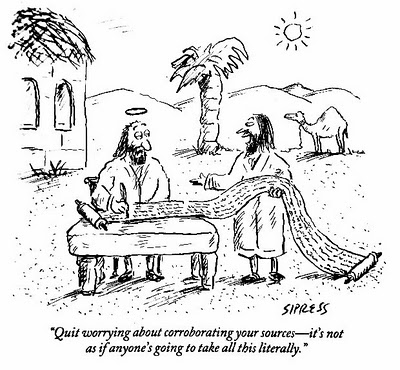 The New York Times recently reported on a controversy surrounding a recent sermon by Katherine Jefferts Schori, the Presiding Bishop of the Episcopal Church in the USA. In a recent sermon, she made an observation about a story in the Acts of the Apostles. Here's the relevant bit of the passage:

One day, as we were going to the place of prayer, we met a slave girl who had a spirit of divination and brought her owners a great deal of money by fortune-telling. While she followed Paul and us, she would cry out, “These men are slaves of the Most High God, who proclaim to you a way of salvation.” She kept doing this for many days. But Paul, very much annoyed, turned and said to the spirit, “I order you in the name of Jesus Christ to come out of her.” And it came out that very hour. But when her owners saw that their hope of making money was gone, they seized Paul and Silas and dragged them into the marketplace before the authorities. When they had brought them before the magistrates, they said, “These men are disturbing our city; they are Jews and are advocating customs that are not lawful for us as Romans to adopt or observe.” The crowd joined in attacking them, and the magistrates had them stripped of their clothing and ordered them to be beaten with rods. After they had given them a severe flogging, they threw them into prison and ordered the jailer to keep them securely. Following these instructions, he put them in the innermost cell and fastened their feet in the stocks.

In her reading of the passage, the Bishop said:

There are some remarkable examples of that kind of blindness in the readings we heard this morning, and slavery is wrapped up in a lot of it.  Paul is annoyed at the slave girl who keeps pursuing him, telling the world that he and his companions are slaves of God.  She is quite right.  She’s telling the same truth Paul and others claim for themselves.[1]  But Paul is annoyed, perhaps for being put in his place, and he responds by depriving her of her gift of spiritual awareness.  Paul can’t abide something he won’t see as beautiful or holy, so he tries to destroy it.  It gets him thrown in prison.  That’s pretty much where he’s put himself by his own refusal to recognize that she, too, shares in God’s nature, just as much as he does – maybe more so!  The amazing thing is that during that long night in jail he remembers that he might find God there – so he and his cellmates spend the night praying and singing hymns.

Apparently this interpretation of the passage has itself annoyed some more conservative members of the Episcopal church, who have accused the Bishop of everything from Biblical illiteracy to apostasy. At the root of the controversy is the idea that an Episcopal Bishop would express sympathy for the slave girl in this situation, suggesting that Paul was the guilty party for expelling the divinatory spirit from her.

I've preached a lot of sermons over the years. Some good, many mediocre, and I'm sure a few outright stinkers. I can tell you that it's a challenge coming up with something fresh to say sermon after sermon after sermon. And while I probably would not have preached this sermon about this passage, as a reader, I find it to be an interesting example of reading the text against itself. It's certainly a legitimate reading of the passage to suggest that Paul's actions were done, not out of some sense of holy mission or a desire to liberate the girl from demonic possession, but out of simple pique. It's right there in the passage! He did it because he was annoyed. She irritated him to the point where he lashed out at her spiritually in order to deprive her of her spirit.

The point, which is often lost on religious conservatives, is that the reading of the Bible is not a science, but an art, and the subjective factors of the reading and the setting must inevitably affect what it is that the preacher says about a particular passage. Despite the cries of fundamentalists, the "plain sense" of scripture is often notoriously difficult to discern, and may at times be unhelpful in using the text to illuminate the present action of God in the midst of the world. As the Times story goes on to note:

Mikeal C. Parsons, a Baylor University professor and author of a book about Acts, wrote in an e-mail that Bishop Jefferts Schori’s critics are probably right that “she interprets the text in a direction” that the original author would not recognize. “That is to say,” Dr. Parsons wrote, “I do not think the author of Acts is criticizing Paul’s actions in any way, certainly not for failing to recognize her ‘gift of spiritual awareness.’ ”

On the other hand, Dr. Parsons continued, “there is nothing in the text to suggest” that the spirit in the woman was “evil.” The story is not necessarily about an “exorcism” of demonic powers. Rather, after driving the spirit out, Paul is thrown in prison, because “her owners are incensed that their financial exploitation of the girl’s divining powers have ended” — they can no longer profit from her fortunetelling. In that sense, Paul is definitely her liberator, in a literal as well as spiritual sense.

Certainly there is a lot in this passage about slavery. The girl is a slave, and she refers to Paul and his followers as slaves of God. Paul is jailed for depriving the girls owners of the income they gained through her slavery, and so in a certain sense reading the text as a story about liberation from spiritual and literal slavery is also totally legitimate. But it's no more legitimate on its face than Jefferts Schori's reading. While, as Parsons notes, it may not have been the intention of the author of Acts to criticize Paul's action, there is nothing to prevent the reader of the story from doing so. The mistake is in believing that, because the story is in the Bible, it's intended to represent something that we should embrace or endorse. Paul, for better or for worse, comes across in the Bible as an often-unpleasant person, and reading the story in a way that foregrounds the unpleasant aspects of his personality is a completely legitimate interpretive move.

Once more, at the end of the day, the tension here is between an approach to the Bible that suggests that there is one, and only one, correct way of reading it in any and all situations, and one that recognizes that the Bible is, like many texts, a machine for generating interpretations. And while there may be better or worse interpregations of particular passages, or ones that are more or less appropriate to a particular time and place, that judgement has to take place in the context of an exegetical and theological conversation that is always ongoing in the life of the community of faith, not one that is fossilized in a particular and immutable historical form.

Posted at 10:55 AM in News, Religion, Society, Theology | Permalink

What interests me is the idea that the girl has been "liberated", because that's not how I see what happened at all. She's still a slave and I can only too easily imagine that when her owners had Paul and Silas jailed, they also beat the crap out of her for getting mixed up with them in the first place. You're right in suggesting that this is one of the places where Paul "comes off as an often-unpleasant person." The whole thrust of the story is about how Paul suffered. My sympathies are much more toward that poor girl.