Recently, Jonathan Ryan at the Christianity Today blog offered up an analysis of George R. R. Martin's Game of Thrones from a Christian perspective, comparing Martin's world to that of J. R. R. Tolkien. His verdict:

Martin is missing Tolkien's sense of "eucatastrophe," the word Tolkien famously coined in his essay On Fairy Stories: "The consolation of fairy-stories, the joy of the happy ending: or more correctly of the good catastrophe, the sudden joyous "turn"…. In its fairy-tale—or otherworld—setting, it is a sudden and miraculous grace: never to be counted on to recur. It does not deny the existence of dyscatastrophe, of sorrow and failure: the possibility of these is necessary to the joy of deliverance; it denies (in the face of much evidence, if you will) universal final defeat and in so far is evangelium, giving a fleeting glimpse of Joy, Joy beyond the walls of the world, poignant as grief."

Ryan argues that "Martin's relentlessly grim view of human beings is far from realistic. He is looking at the world with just one jaundiced, damaged eye."

On the one hand, Ryan is certainly right that Martin's view of the world is much darker than Tolkien's, but it's a rather strange to criticize Martin for writing a different kind of story than Tolkien. What's more, I think the key difference between their stories is precisely the one that Ryan overlooks, namely, that Martin isn't writing a "fairy story" in Tolkien's sense. Rather, Martin is writing the historical fiction of an imaginary world, and as such, he is trying to convey as realistically as possible the human limitations and failings of a world that runs according to the principles of "real-world" power politics, and not according to an idealistic assessment of how the world ought to work. The underlying moral question for Martin is whether there is still any place for honor or morality in such a world. The answer to that question, it seems to me, is still very much in doubt for Martin.

But there are many characters in Martin's universe who still attempt to embody principles of nobility and honor, even in the midst of their tragic and fallen circumstances. Ryan's biggest misstep, as Amanda McInnis points out at Cheesewearing Theology, is in his reading of Tyrion Lannister. In comparing Tyrion to Gollum, he demonstrates how little he knows about the character:

Martin paints this grimness in the portrait of Tyrion Lannister. Tyrion is a small and deformed figure born to a powerful and noble family in Westeros. Years of poor treatment and outright abuse leads Tyrion to drink more and more deeply from the corruption around him.

If you've read Lord of the Rings, you can't help but compare Tyrion to Smeagol, the hobbit who becomes Gollum after becoming corrupted by Sauron's ring The difference comes in Frodo's attempt to redeem Gollum. That attempt has no parallel in Martin's world, nor is there anything like Gandalf's admonition to treat Gollum with kindness. Tyrion has no Frodo, and he never will. No one reaches out to him; no one tries to save or redeem him.

Amanda notes how wrong-headed this reading is:

Ryan fundamentally misunderstands and misconstrues the character of Tyrion. In fact, I would argue that Tyrion is in fact one of the most honourable characters in Westeros, with the understanding that the rules of morality in A Song of Ice and Fire are very, very distinct from the rules of morality in something like The Lord of the Rings. Indeed, it is this honour-in- spite-of-all-he’s-been-through that makes Tyrion one of the more beloved characters to readers (and viewers). The same endearment cannot be said of Gollum.

In trying to compare Tyrion to Gollum, the author overlooks all the good things that Tyrion has done.

Tyrion befriends Jon Snow. He rescues Sansa from a fate worse than death if she were to stay in King’s Landing. He protects the kingdom from Joffrey, by reining him in as best he can.

There is nothing comparable to be found in Tolkien's treatment of Smeagol, who is utterly corrupted by the ring and ultimately serves only the Ring, and subordinately himself. When Tyrion is raised, against all expectations, to be the Hand of the King, and asked what he intends to do, his first response is: "Justice."

And by and large he does this. As Amanda notes, he also does other, quite horrible things, most of which are understandable in the context of the character and his sufferings (Amanda says that "while they are not inexcusable, they are understandable," but I think she means that they actually aren't in themselves, actually excusable). But no matter what evil Tyrion does along the way, it is clear that at almost every point, at least to the end of A Storm of Swords, he is acting to keep his head above the waters of corruption in which he's immersed, to hold on to a sliver of morality, while still doing what's necessary to stay alive in the context of the deathtrap that is Westerosi political life.

As much as Ryan misreads Tyrion though, I suspect he also fundamentally misreads real-world politics, at least in the context of the Medieval setting that Martin is attempting to emulate. While modern politics tends to publicly eschew the kinds of cloak and dagger assassination that is part of life in Westeros, one only needs to pick up any reasonable history of ancient Rome, or Medici Italy, or the English War of the Roses (Martin's historical inspiration for the series), to understand that the maliciousness and brutality of political life was indeed part and parcel of a particular time and place.

Even today, the realities of war and politics are far less subject to moral constraint than Ryan seems to acknowledge. Surely he recognizes that in many war zones around the world, the tactics used by Gregor "The Mountain that Rides" Clegane are nothing new. Surely he's read about Vladimir Putin's penchant for eliminating his political foes through the creative use of applied nuclear physics. Surely he's aware of the damage done to the "small folk" around the world by our own projection of military power, whether via the repeated invasions we've undertaken over the last decade or via the "death from above" approach to drone warfare we've embraced in the last few years. While we may like to comfort ourselves with the illusion that political life and war-making in the 21st century are less brutal than in the past, or that Martin doesn't accurately represent the "real world" of violence in his fantasy setting, I suspect that Martin understands what those circumstances are like from the inside with far more perspicacity than Ryan does.

None of which is to say that there is not room for honor, nobility, bravery and morality in either Martin's world or our own, but what Tyrion Lannister (as well as Ned Stark, Jon Snow, Jeor Mormont, Robb Stark, and Brienne of Tarth) reveals as a character is that those characteristics, when they are displayed, put one at great risk in a world where those traits are viewed as weakness. and thus one's survival in such a setting requires one to be "wise as a serpent" if one wishes to strive toward being "innocent as a dove." 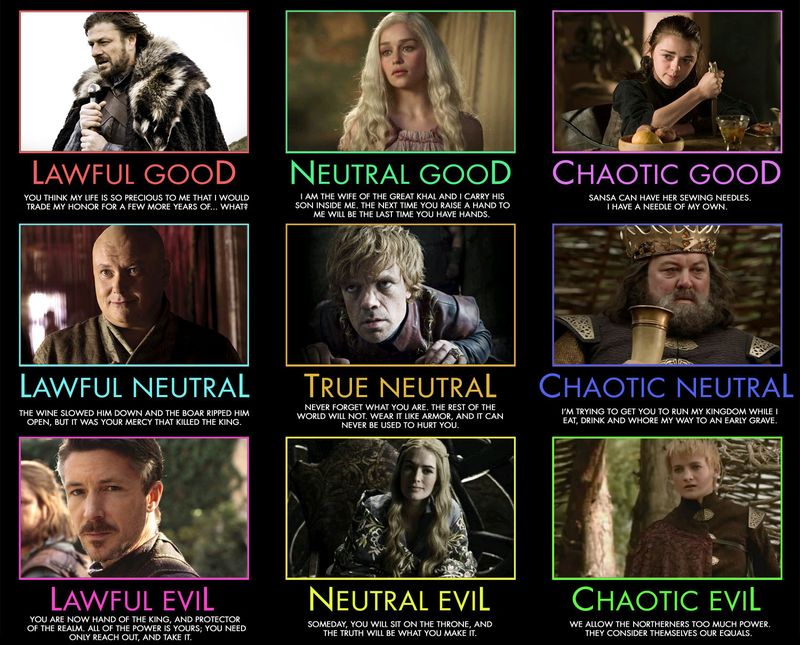