Just What Is Up With Pussy Riot and Religion, Anyway? 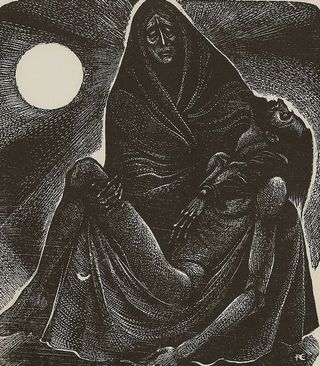 Apart from the headlines, I haven't been following the whole Pussy Riot case in Russia particularly closely. I've know the broad outlines of the case, and I was aware that several of the members of the "punk feminist collective" had been tried and imprisoned for allegedly disrupting a church service to protest Vladimir Putin. But beyond that, most of the content of their protest had escaped me.

I was fascinated, then, to read Betsy Philips' post at ThinkProgress about a recent Vanderbilt University panel exploring the deep religious roots of Pussy Riot's protest, and its connection to the larger currents of Russian politics and history:

What Spektor explained was that the new church stands on a site of monumental rhetorical significance, a site that is always seen as meaningful by the people who have power at the time. So, it’s not just a church, not even just a cathedral, but a monument to who controls Russia. And the Church Patriarch has been incredibly supportive of Putin, seeing him as a man who is erasing the mistakes of history—in other words, erasing the erasure of the Russian Orthodox Church.

Pussy Riot, as Tim Beale later pointed out, is trying to disrupt this marriage of church and state, since the state uses religious leaders and religious symbolism to further the state’s agenda. Beale further went on to quote some from Pussy Riot about how they imagine religion as a “pool of creative wisdom” from which everyone is free to draw out what is meaningful and useful to them, whereas they see their opponents as using it as a political cudgel, which they think corrupts the Church.

The members of Pussy Riot drew from that pool of "creative wisdom" in formulating a prayer to the Virgin Mary, calling on her to side with them against the power of repression in contemporary Russia, particularly the repression of women:

For Philips, this prayer evokes memories of Liz Phair and the Riot Grrrl era of '90s rock. But for me, it evokes nothing less than Mary's own Magnificat:

My soul proclaims the greatness of the Lord, my spirit rejoices in God my Saviour;
he has looked with favour on his lowly servant.

From this day all generations will call me blessed;
the Almighty has done great things for me and holy is his name.

He has mercy on those who fear him,
from generation to generation.
He has shown strength with his arm
and has scattered the proud in their conceit,

Casting down the mighty from their thrones
and lifting up the lowly.

He has filled the hungry with good things
and sent the rich away empty.

He has come to the aid of his servant Israel,
to remember his promise of mercy,

The promise made to our ancestors,
to Abraham and his children for ever.

Posted at 08:03 AM in Ethics, Political, Religion, Society | Permalink