People Who Play Dungeons & Dragons Know That Succubi Are Not Real 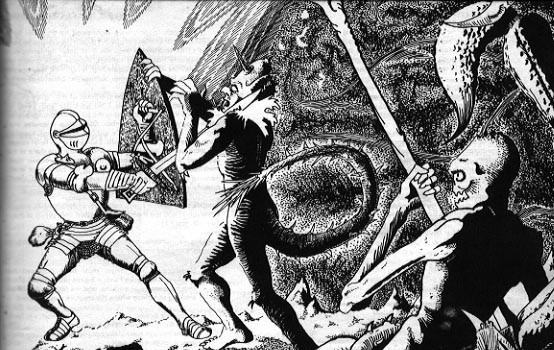 A Paladin In Hell


I clearly have not been doing my part to drive traffic to Slacktivist lately, but today I'm going to try to atone. So let me begin at the intersection of religion geek and gamer geek, a place where I not only hang out but pretty much live.

Slacktivist points us to two articles, the first, as you can see here, is thearticle on succubi from the Forgotten Realms wiki. It's pretty much the standard Dungeon & Dragons definition of a succubus. viz.

Of the many demons that exist in the universe, the succubus is the one most often encountered in the mortal world. This is due to her extraordinary beauty and carnal desires; traits that attract mortal spellcasters to summon the demoness forth to use for their own debased desire. Succubi delight in causing suffering by manipulating the desires of mortals and tempting them into depraved acts that they would normally avoid.

OK, with me so far? If you're not a gamer geek, I want to make this point absolutely clear: To D&D players, a succubus is a fictional monster that exists to be resisted, fought, banished or otherwise defeated. The key phrase there being "fictional monster."

Thsis brings us to the second article, entitled "Can You Be Raped By the Devil." Here is the key passage from that article:

Adams notes that one evangelist, whose name she would not divulge, was so troubled by the sexual pleasure the succubus gave her that she even contemplated suicide.

Adams says the succubus spirit that used to attack her confused her so much that she contemplated becoming a lesbian.

"Unless you're strong enough to rebuke it, they'll keep coming back," she says. "You must speak the Word of God, knowing you have power in the name of Jesus."

There are remarkable similarities between the two passages, no? The key difference, as Slacktivist notes, is that "people who play Dungeons & Dragons know that succubi are not real."

To which I can only reply by saying that Slacktivist has clearly never played a paladin in a campaign with a rat-bastard DM, who continually throws succubi at you in order to tempt your character into a transgression of the Paladin's Code. Have that happen to you often enough over the course of a campaign, and you begin to believe, if not in the existence of sex demons per se, at least in the fundamental evil at the heart of every Dungeon Master.

Posted at 07:19 AM in Fun Stuff, Religion, Society | Permalink