« People Who Play Dungeons & Dragons Know That Succubi Are Not Real | Main | Destined Not for Darkness, but Light » 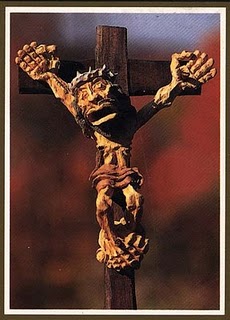 The incarnation is the mystery at stands at the heart of Christianity. For many theists of other traditions, it is, as the Apostle Paul wrote, a stumbling block, a barrier that prevents entry into the Christian faith. It may be possible to believe in God, but to believe that God would choose to become human, and not only human, but merely human. Not a superman, not a king, not even particularly noteworthy in any conventional sense, but simply, unadornadly human. This is too much to contemplate.

Yet, for Christianity, it is perhaps the one non-negotiable distinctive dimension of Christian doctrine. Without the incarnation, Christianity ceases to be Christianity. It may be many good and wonderful things, but in the absence of the incarnation, it simply becomes one theism among others, and Jesus becomes simply one prophet or holy man among others. It is only because Jesus Christ is understood to be in some unque sense the presence and power of God made manifest in human form that Christianity exists at all.

But all this said, why is the incarnation so central to the Christian faith? What does it signify? If it is a mystery, what does it gesture toward? What truth does it reveal?

Of course there are lots of theories about what the incarnation is about, the most famous of which is probably St. Anselm's "Cur Deus Homo" ("Why a God-Man?"). Anselm argues that the incarnation was necessary because humanity had incurred through sin an infinite debt that could only be expiated by a being of infinite righteousness. Since the debt was incurred by humanity, only a human could pay it, but because the debt was infinite, only God was capable of paying it. The solution wa thus for God to become human in order to pay the debt. This solution may have been convincing in the context of a medeaval fudal system of honor and obligation, and it is apparently still very convincing to many Christians today, since it's frequently invoked as though it were a compelling explanation of both the incarnation and the atonement. Yet in the absence of that fudal context, it seems increasingly absurd and unconvincing, making God a capricious and arbitrary Lord, taking his pique out on his vassals for minor infractions.

St. Athanasius may have a better solution, arguing that the incarnation was necessary in order to overcome the curse of death. Because human nature is mortal and divine nature immortal, God sought to bring immortality to the human condition by bringing his divine and immortal nature to the human condition. Thus Athanasius argues, "He became as we are that we might become as he is." In effect, God's humanization is the precondition for our divinization.

In Christ, we see where God's love is located: With those on the margins, on those who are oppressed and victimized by the powerful and wealthy, since it was those with whom Christ chose to dwell. And in this regard, the cross is an expression of God's solidarity with the human condition in every dimension of foresakenness and alienation, even Godforsakenness. Christ dies horribly so that God's love may extend to us in the midst of every suffering, every death, and every damnation. This is the theological significance of the idea of Christ's descent into hell -- that God's desire to save, God's solidarity with us in our lostness, extends even to the depths of the most profound despair.

So, why incarnation? Perhaps unsurprisingly, I will let Jürgen Moltmann have the last word:

“When God becomes man in Jesus of Nazareth, he not only enters into the finitude of man, but in his death on the cross also enters into the situation of man's godforsakenness. In Jesus he does not die the natural death of a finite being, but the violent death of the criminal on the cross, the death of complete abandonment by God. The suffering in the passion of Jesus is abandonment, rejection by God, his Father. God does not become a religion, so that man participates in him by corresponding religious thoughts and feelings. God does not become a law, so that man participates in him through obedience to a law. God does not become an ideal, so that man achieves community with him through constant striving. He humbles himself and takes upon himself the eternal death of the godless and the godforsaken, so that all the godless and the godforsaken can experience communion with him.” -- The Crucified God

Posted at 11:33 AM in Religion, Theology | Permalink

I am confused by your characterisation of Anselm's explanation of the incarnation. Admitting that I am one who holds to it, or perhaps a form of it, I fail to see how it can be said to make God "a capricious and arbitrary Lord, taking his pique out on his vassals for minor infractions," nor how it can be said only to make sense within a feudal context. I, for one, understand it as God taking the only possible step to heal a relationship vitiated by sin. Only a human could accomplish this, since it was we who did and continue to vitiate that relationship, but only God possesses the power to do so. The incarnation was thus an act of love and self-sacrifice, God giving of himself to help us achieve what only we could achieve but which is beyond us on our own, and betrays neither caprice nor pique.