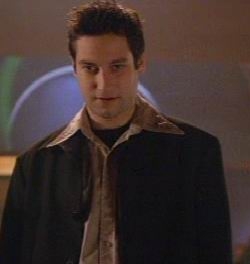 Gawker recently published a profile of Reddit "redditor" Violentacrez, who has apparently become well-known in certain corners of the internet world for trucking in the most vile, racist and misogynist kinds of internet trolling. Apparently Gawker's Adrien Chen was able to track down Violentacrez true identity and confront him about his behavior. The result was a deeply disturbing interview with a deeply disturbed individual. Read it at your own risk. It's pretty disgusting.

However, Alyssa Rosenberg at ThinkProgress pivots from the Violentacrez story to consider how a certain kind of geek misogyny (which we've seen far too much of in recent months), was pressaged by none other than Buffy the Vampire Slayer, particularly in the person of Warren Meers:

Warren is a decidedly nastier specimen than either Jonathan or Andrew, almost a living incarnation of the more provocative solutions to social insecurity and lack of success with women posited by lonely men online and elsewhere. When we meet Warren, he’s done the magical equivalent of one Reddit user’s suggestion that “one day they’ll bio-engineer a *live* fleshlight. and when it’s not in use, it can be kept in a cage and fed hamster food,” building a robot, April, he uses for sex rather than interacting with a real woman. When he starts dating Katrina, a human woman, he abandons April to run out of batteries, an act tantamount to murder, given that he endowed April with some basic sentience. Later, Warren creates a similar sex robot replica of Buffy that the vampire Spike uses to vent his desire for her—Spike later attempts to assault Buffy, an act of ugly violence that prompts him to reevaluate his life. ...

The Trio’s attacks on Buffy are often manifestations of sexism or sexist desires. They turn her invisible in “Gone,” leaving her voiceless and with limited ability to affect the world around her. They work ugly magical gaslighting on Buffy in “Normal Again,” convincing her that her life and work as a Slayer, the things that make Buffy strong and special, are merely a delusion, a result of severe mental illness that’s left her incarcerated in an institution. And the climactic confrontation between them is sparked when Warren takes steps to address the thing that he hates most about Buffy: that she is more powerful than he is. When Warren fails to equal Buffy magically, he tries to kill her with a handgun, and ends up murdering another woman, Willow’s girlfriend Tara, instead.

Alyssa does a great job tying in the themes that Joss Whedon develops through the character of Warren to the issues of anti-woman geek-ness that have been giving nerddom a bad name these past several months. Her piece is well worth reading.

Posted at 10:12 AM in Ethics, Society, Television, Web/Tech | Permalink