« Millennials, Religion, and Jerry Falwell | Main | You Don't Get To Be Nice » 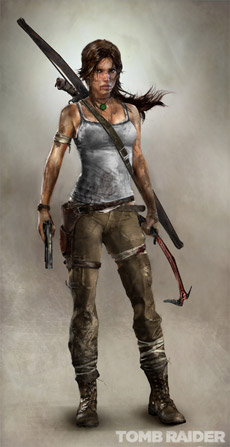 It's been a bad couple of weeks for geeks on the misogyny front. As Alyssa Rosenberg has been reporting at ThinkProgress, an obnoxiously vocal subset of the gamer nerd subculture has decided to put their hatred of women on full display.

Exhibit A: The misogynist ranting at Anita Sarkeesian over her Kickstarter project on "Gaming Tropes vs. Women." Click the link if you want some samples of what was said on her site and in response to her Youtube promotional video. In addition to the sexism, you get bonus anti-Semitism and malicious pranksterism, as apparently seeking to shame her into silence wasn't enough, her detractors also decided to flag her videos as terrorism. As the Escapist article says:

On top of those beauties, there's the usual threats of violence and rape, as well as organized efforts to have Sarkeesian's YouTube videos flagged as terrorism and her Kickstarter project defunded. YouTube comments are, by and large, where the lowest common denominator goes to slum it for a while, so people posting awful things is hardly unusual. What is unusual, is the sheer depth of hatred on display. If the aim of the outrage was to prove that the gaming community doesn't have a lingering problem with women, well ... good job, guys.

Exhibit B: The Lara Croft rape mechanic. Apparently the newest iteration of the venerable Tomb Raider series will depict a scene in which Lara Croft is at risk of being raped, and what happens depends on how the player handles the encounter. As Alyssa describes in detail, there are just so many layers of wrong to this: From the failure of imagination it represents as a narrative devices, to the failure to empathy it displays, to the way in which it plays into stereotypical male fantasies of being the "rescuer" of the helpless woman.

Add to this the reaction to Alyssa's initial report, in which some of her comnentators cheered the possibility of actually allowing Croft to be raped in game and the whole spectacle is simply too odious for words. As Alyssa notes in her open letter to these commentators:

Is it entertaining to you to see this powerful woman reduced in some way, made vulnerable to something whether you’re the person enforcing her powerlessness or not? Because if that’s the case, really, what are you so frightened of? Lara Croft is not some sort of proof that men have been replaced as adventurers, or that men are unnecessary. To paraphrase Orson Scott Card’s Piggies talking about their desire to participate in the full life of the universe alongside humanity, feminism is not about being there first, about rendering men irrelevant. It’s about being there, too. I’d think that needing to see Lara Croft, or any other strong woman, made vulnerable isn’t pushback against misandry, the unicorn of oppressions. It’s evidence of fear, proof of John Scalzi’s theory that relying on patriarchy is really playing the game of life on the easiest setting rather than being willing to collaborate, and in some cases compete. If that’s what you really want, to be spared the presence of women in your lives because you find us threatening and upsetting, you may be able to find a way to do that, for a little while longer. But I don’t think it’s going to last. You can’t put all of us in whatever it is you perceive to be our places. There are too many of us. And whether you want to acknowledge it or not, there are a lot of men who will tell you that having women is a value add to their lives, not a painful surrendering of territory. You can fight for whatever barren rock you want to make your last stand on. But why not check out what men and women are building together? If you like what you see, then welcome.

Exhibit C: The degradation of female gamers. Again, via Alyssa, whose reporting on this has been stellar, Aisha Tylor's account of her treatment as a woman who loves to game, and the men who don't believe she's a gamer.

What all of this adds up to is a serious round of shame for the gaming community in particular, and male geek culture in general. Because this really extends far beyond video gaming. This extends to tabletop gaming as well, it extends to ComicCon, and the whole convention culture of booth babes and the casual denigration of women.

This is a problem of long standing in the predominantly male world of geekdom. There have always been girl geeks, and there have always been men around willing to marginalize them and objectify them for reasons that I've never been able to fully comprehend. Maybe it's simply that, marginalized as guy geeks often are, they look for someone that they feel powerful enough to marginalize in turn (woe betide the guy geek who tries to do that to any of the female gamers I know, though; they'll definitely get more than they bargained for), maybe its insecurity and social awkwardness, which are not unheard of among the nerd clan. But whatever the root causes, it's damaging to the individuals who perpetrate it as well as their targets, and its damaging to geek culture at large.

For my entire life, I've wondered why there aren't more women involved in the hobbies I enjoy: Gaming, science fiction, comic books, etc. The truth is, I've been fortunate to have met some wonderful female friends over the years in those pursuits, but the norm and expectation always seems to be that they're rarities in a male subculture. Examples such as those I've cited above offer some reasons why that persists.

A dear friend of mine recently revealed to me that she was a gamer of long standing, something that I had never known because I had never bothered to ask. Why hadn't I asked, she wanted to know. I told her quite honestly because it was rare to come across a woman who liked to game, and so I defaulted to the assumption that she didn't. Of course, coming out as a gamer of a certain kind always feels like a bit of a risk anyway, but if I had asked her if she'd like to play, it would have led to some very enjoyable conversations, and maybe even a game or two.

When we begin to get out of the gendered rut that geek culture has surrendered to, there are some new possibilties for the deepening of the entire subculture and widening its appeal. The last decade has seen some genuine progress on that front, but much more remains to be done. But the examples of the last few weeks can damage years of careful bridge building and door opening.

And of course, there are examples of strong, self-reliant, powerful women within the geek community, who deserve to be lifted up as alternatives to pop cultural garbage, as illustrated here (apologies for the amount of skin, but it serves to make a point): 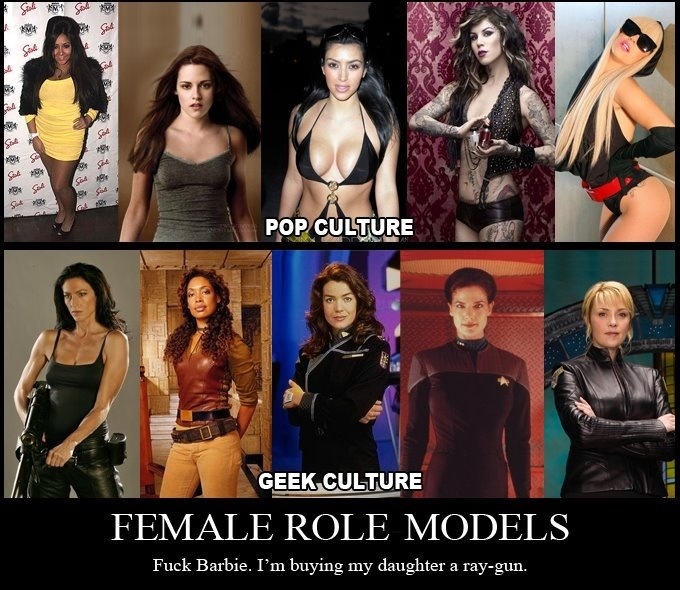 Badass woman-warriors are easily better role-models than much of what pass for cultural icons today.

Just because geek culture has a reputation for appealing to adolescent boys doesn't mean that we're required to act like adolescents.