« Israel, the Occupation, and Palestinian Christians | Main | Return of the Son of Sex for Christians » 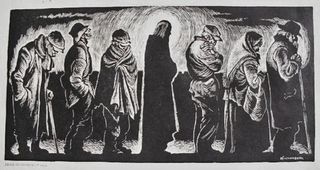 Via a new study from the British think tank Demos (via Alternet):

These findings are important to America for two reasons.

First, they tell us that, contrary to evidence in the United States, the intersection of religion and politics doesn't have to be fraught with hypocrisy. Britain is a Christian-dominated country, and the Christian Bible is filled with liberal economic sentiment. It makes perfect sense, then, that the more devoutly loyal to that Bible one is, the more progressive one would be on economics.

That highlights the second reason this data is significant: the findings underscore an obvious contradiction in our own religious politics.

Here in the United States, those who self-identify as religious tend to be exactly the opposite of their British counterparts when it comes to politics. As the Pew Research Center recently discovered, "Most people who agree with the religious right also support the Tea Party" and its ultra-conservative economic agenda. Summing up the situation, scholar Gregory Paul wrote in the Washington Post that many religious Christians in America simply ignore the Word and "proudly proclaim that the creator of the universe favors free wheeling, deregulated union busting, minimal taxes, especially for wealthy investors, and plutocrat-boosting capitalism as the ideal earthly scheme for his human creations."

The conflation of economic conservatism and conservative Christianity in the United States is something that continues to puzzle me. While one might reasonably be able to draw some of the more culturally conservative conclusions that many evangelicals rely on from the Bible (though not nearly as strongly as they seem to think), there's no way a reasonable Christian can read the Bible and come to the strange libertarian conclusions that are so much the bread and butter of the religious right on economic issues (as, for example, recent statements by Rick Warren demonstrate).

At the same time, I want to be cautious here. It's also not true that you can draw any kind of detailed conclusions in favor of socialism from the Bible either. As my conservative friends would no doubt remind me very quickly, the Bible may instruct Christians to act with charity toward their neighbors, but that's not the same thing as asking the government to do so.

This is true, but not really on point. It demonstrates the key deficiency with attempting to base any kind of public policy on the Bible. What Christians can and should conclude from the Bible is that we are corporately called upon to look after the widows, orphans, and strangers in our midst -- in other words, the weak and vulnerable. Once we understand that as our moral obligation, the question becomes what is the best method for doing that.

Now, conservatives and liberals on economic issues can reach different conclusions on that point, but the underlying question of responsibility is quite clear: We do in fact have a social, corporate obligation to care for the weak. As a matter of economic ethics, I think the evidence is strong that a comprehensive social safety net, that promises decent and abundant social services to all citizens, is the most effective way of doing that. While conservatives may be able to make some cogent arguments against me on that front, insofar as we are in an argument about Christian moral responsibility, they can't argue against the basic need to protect the vulnerable.