Ed Darrell at (in?) Millard Fillmore's Bathtub reminds us of this famous poem by Martin Niemöller.

Niemöller and his actions generate controversy — did he ever act forcefully enough? Did his actions atone for his earlier inactions?  Could anything ever atone for not having seen through Hitler and opposing Naziism from the start?  For those discussion reasons, I think it’s important to keep the poem attributed to Niemöller.  The facts of his life, his times, and his creation of this poem, go beyond anything anyone could make up.

These are fair questions, and I agree that this poem is an important expression of both the guilt and the solidarity that Niemöller took on himself through his words and actions. While he was initially supportive of the Nazis, he quickly realized the danger that they represented to Germany. But even then, initially his concern was not for the Nazi victimization of the Jews, but for the integrity of the church, which was being taken over by Nazi ideologues. It was only late in the game that he, with many other members of the confessing church, came to realize the moral responsibility they bore for the well-being of the Jews, and their culpability for not speaking up on their behalf sooner.

Tillich and Bonhoeffer are two theologians who deserve credit for opposing the Nazis early, and for the right reasons. Niemöller, with many other German Christians, came late, but at least got there. More's the pity for the many others who never got there at all.

EDIT: I'm playing around with typepad's new "blog it!" feature, which allows you to do posts without having to open up typepad. I'm still getting used to it, so I apologize for the glitches.

Via Ross Douthat, an article in the Financial Times discussing the role that Christian Tories are playing in the British political system:

“They” are evangelical Christians, and the MP was prompted to speak by a meeting a week earlier. The party had held an “open primary” (in which members of the public can vote) to choose a candidate to stand for a safe Tory seat – Congleton, Cheshire – in this year’s general election. The two leading names on the ballot were Matthew Hancock and Fiona Bruce. Both are well-known within Tory circles. Hancock is an economic adviser to the party, Bruce a solicitor who fought valiantly, if unsuccessfully, for a seat in the north-west in the 2005 general election. The main difference is religion: Hancock is secular, Bruce an evangelical Christian.

From an American perspective, the surprising thing is not that there's an evangelical Christian in an advisory capacity to the leader of the conservative party, but that there's a secular guy there. But then the Tories of today should not be understood as the British equivalent of the Republican party of today. They are both conservatives, but their conservatisms are worlds apart. As to the role of evangelical Christians in the Tory party, the real question, it occurs to me, is not whether Christians are in these positions, either here or in the UK, but what if any difference it makes in terms of policy.

With any luck, I'll be able to catch some of the Health Care Summit today. Part of me enjoys the pure political gamesmanship of it, but honestly, if we don't get comprehensive health care reform out of this, it will all have been a big waste of time.

Public Theology for a Global Society 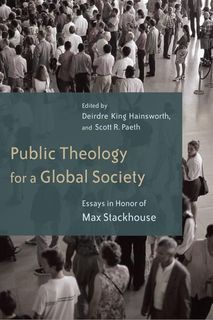 I want to just take a moment to promote my new book, a collection of essays in honor of Max Stackhouse, edited by me and Deirdre King Hainsworth.

In these essays honoring ethicist Max Stackhouse, leading Christian scholars consider the historical roots and ongoing resources of public theology as a vital element in the church’s engagement with global issues. / Public Theology for a Global Society explores the concept of public theology and the challenge of relating theological claims to a larger social and political context. The range of essays included here allows readers to understand public theology as both theological practice and public speech, and to consider the potential and limits of public theology in ecumenical and international networks. / The essays begin by introducing the reader to the development of public theology as an area of study and to the historical interrelationship of religious, legal, and professional categories. The later essays engage the reader with emerging problems in public theology, as religious communities encounter shifting “publics” that are being transformed by globalization and sweeping political and technological changes. / The breadth and scholarship of Public Theology for a Global Society make this volume a fitting tribute to Stackhouse — a central figure in Christian ethics and pioneer in the church’s study of globalization.

One day, maybe not today, maybe not tomorrow, but I hope soon, it will no longer be necessary to fight these kinds of fights. Justifying anti-gay bigotry on the grounds that "God wants to kill the gays!" will be the kind of thing that automatically delegitimizes someone in reasonable society. But in a world where Rush Limbaugh can be allowed to stay on the air despite repeated and overt examples of his bigotry, I fear that day is a long way off.

From another angle, however, this is simply more evidence that many Christians don't really know how to do ethics. The idea that "the Bible says, I believe it, that settles it" is a sufficient basis for figuring out what it means to be Christian in the world is wholly inadequate to any actual engagement with the actual world.

On the other hand, while there's a lot to like in Dan Savage's response, I do wish MSNBC would consider bringing on an actual Christian to refute these kinds of things. Savage was a seminarian, and knows his bible and theology, but if you're going to push back against this kind of rhetoric, the best way to delegitimate it is to have other Christians refute it.

Nearly 25% of all mortgages are underwater

First American CoreLogic, the research firm that monitors housing equity, reported Tuesday that 11.3 million homeowners -- or 24% of all homes with mortgages -- were underwater as of the end of 2009. That's up from 23% and 10.7 million borrowers three month earlier.

So, this is bad. Really bad. It remains to be seen what will happen in the face of this kind of shift in home values. If I am a home owner and I'm under water on my mortgage, I have basically three options: 1) sell the home for less than the mortgage, in which case I have no home and still owe tens, perhaps hundereds of thousands to the bank; 2) stay in the home, and hope I can continue to make the payments; or 3) declare bankruptcy, leave the keys in the mailbox, rent for a while and try to start over with a clean slate.

There is a fourth option I'll mention: 4) renegotiate my mortgage with the bank to bring it more in line with the actual value of the home. This kind of readjustment makes sense, given the radically inflated prices of houses over the past several years. Several folks in congress have suggested that the banks need to "take a haircut" on these mortgages, but the banking interests are strongly against this plan. Ultimately it will take the kind of leverage created by the possibility of a wave of new foreclosures and bankruptcies to force the banks to make some kinds of concessions. Here's hoping it happens soon, and not too many people are crushed beneath the wheels.

"Terrorists Have Beards and Live in Caves"

Via Glen Greenwald, this not-very edifying conversation in Newsweek on why the guy who crashed his plane into a government building was not, bizarrely, a terrorist:

Yep, comes down to ID. This guy was a regular guy-next-door Joe Schmo. Terrorists have beards in live in caves. He was also an American, so targeting the IRS seems more a political statement -- albeit a crazy one -- whereas Abdulmutallab was an attack on our freedom. Kind of the idea that an American can talk smack about America, but when it comes from someone foreign, we rally together.

There are times, increasingly many over the past several years, where I doubt my own sanity. There are others when I doubt everyone else's. This kind of thing is the reason why.

How can it be so apparent to me why this kind of a statement is so clearly wrong, and yet it's held up by Newsweek Magazine as an example of an appropriate and dispassionate dissection of the meaning of the word "terrorist." This statement (which is only one of several equally egregious examples), is so freighted with ideology as to render anything that comes from Newsweek suspect on the topic of terrorism, the war, or the Middle East.

If you get your news from morons, it should be no surprise when it turns out you don't know what you're talking about.

But what jumped out at me while surfing the web today was the ad shown here, for "conservative t-shirts." As 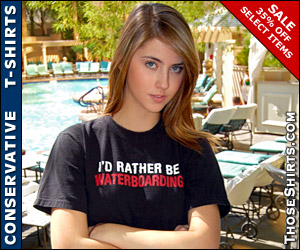 you can see, the young woman is wearing a shirt that says "I'd Rather Be Waterboarding." If you go to the website (which I'm declining to link to, thank you very much), you find that it's not the only pro-torture t-Shirt there (along with many other t-shirts sporting eliminationist slogans and rhetoric).

This is yet another example of the mainstreaming of torture on the modern American right. Where once Ronald Reagan signed the International Convention Against Torture, now his descendants are so emphatically in favor of it that they're willing to wear clothing advertising the fact.

There's no particular reason that movement conservatism had to go this way. It is the legacy of the kind of shell-shocked reactionary desire to punish that a lot of people felt after 9/11. The difference is that those in the administration, with the power to implement that desire, decided to make their search for vengeance official U.S. policy, not to be kept in the closet, but to be shouted from the rooftops -- at least, once their torture policies were exposed.

Thus, we now are in a situation where top conservative leaders go on television every week and run down the Obama administration's much more successful approach to combatting terrorism (which does not include torture), while celebrating their own willingness to inflict unnecessary pain on other human beings for at best dubious reasons. Dick Cheney and his odious offspring are only the most shameless purveyors of this political filth, but it has become a commonplace in many corners of the conservative world. With a few (vanishingly few) exceptions, official conservatism has embraced torture with its whole heart, and nothing represents how thoroughly corrupt the movement has become better than these t-shirts.

You Mean We Don't Already Live There?

Broder's column, much like Palin's speeches, is devoid of all substance. He didn't, and couldn't, point to a single idea, proposal, or achievement the right-wing Alaskan has presented that has even an inkling of value. On the contrary, Broder seems to suggest that Palin deserves accolades precisely because she has no real interest in ideas, proposals, or achievements. She's at the "top of her game," the columnist argues, not because Palin has any idea what she's talking about, but because she can "sell herself."

What Broder neglects to mention is that this deliberately know-nothing approach to politics during challenging times is a recipe for an idiocracy. To maintain American preeminence in the 21st century, the country must resist the urge to celebrate stupidity, whether Broder is "impressed" by it or not.

One wonders, at times, just why it is that David Broder has the reputation he does, given the worthlessness of his opinions.