Why Crazy People Should Not Be Allowed to Write

There aren't words to describe this. Seriously:

Barack Hussein Obama has taken the nation by storm. From obscurity, with zero executive experience, or much of any kind, he has vaulted into the position of Presidential frontrunner. It is stunning. On the surface, it appears attributable only to his eloquent oratory and his race. But an invisible factor may be a strong spiritual force behind him, causing some people to actually swoon in his presence...

Last week at Obama's acceptance speech, that spirit exalted itself in front of a Greek temple-like stage, and to a huge audience like in a Roman arena. Obama was portrayed as god-like. His voice thundered as a god's voice.

At the end, Democratic sympathizer Pastor Joel Hunter gave the benediction and shockingly invited everyone to close the prayer to their own (false) gods. This was surely an abomination, but it was compatible with Obama's expressed theology, and Hunter's leftist leanings.

God was not pleased...

We quickly learned that Sarah is a born-again, Spirit-filled Christian, attends church, and has been a ministry worker.

Sarah is that standard God has raised up to stop the flood. She has the anointing. You can tell by how the dogs are already viciously attacking her. But they will not be successful. She knows the One she serves and will not be intimidated.

Back in the 1980s, I sensed that Israel's little-known Benjamin Netanyahu was chosen by God for an important end-time role. I still believe that. I now have that same sense about Sarah Palin...

Only God knows the future and how she may be used by Him, but may this noble woman serve to bring renewal in the land, and inspiration.

Yes, such a noble woman. And such a noble attempt at theology. After all, what other explanation could there be for the rise of Barack Obama. It's self-evident that he's the anti-Christ. And of course, Sarah Palin, who has "the annointing," but be God's chosen instrument to stop him. And after all, if you can pick Bibi Netanyahu as the chosen one, you've got a pretty good record to stand on.

But wait! I thought that these guys wanted the anti-Christ to come. In fact, I though the whole point was that the anti-Christ is the instrument of God's eventual restoration of all things. Why, then, would God send Sarah Palin to stop a plan that he himself foreknew since the dawn of time.

Clearly, this is all much to sophisticated for me.

"And they say my jokes are bad":

Consider the picture below: 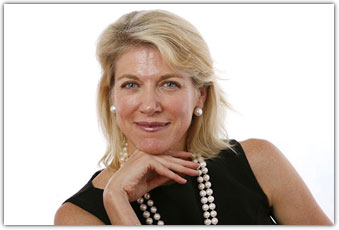 This is a picture of Lynn Forester de Rothschild, former Hillary Clinton supporter, who has apparently now decided to vote for John McCain because, get this,  she thinks Barack Obama's an "elitist."

Pause to consider that for a moment, but as you do, consider what Steve Benen has to say about Ms. de Rothschild:

The next sound you hear will be the sound of my head exploding.

Nice pearls, by the way, Lynn.

Via Sullivan, I find that there's a new poll out reflecting Evangelical Christian views on the justification for torture:

A new poll released Thursday (Sept. 11) finds that nearly six in 10 white Southern evangelicals believe torture is justified, but their views can shift when they consider the Christian principle of the golden rule.

The poll, commissioned by Faith in Public Life and Mercer University, found that 57 percent of respondents said torture can be often or sometimes justified to gain important information from suspected terrorists. Thirty-eight percent said it was never or rarely justified.

The good news, such as it is?

David Gushee, a Christian ethics professor at Mercer and the president of the evangelical group, said the poll numbers should tell leaders, including presidential nominees Barack Obama and John McCain, who oppose torture that people can change their minds about this issue if it is discussed from a moral standpoint.

"Opinion on this question is movable," he said.

This doesn't completely work, but it's very funny.

I particularly like the guy with the coffee cup, just popping up every so often to sing "One Day More!"

"We're On a Mission from God"

I know that Andrew Sullivan can drive anyone crazy, but he's the one conservative I regularly read, because a) he's half-way sensible about half the time, and 2) he links to some very interesting items. And thus it is today that he turns me in the direction of this post from David Kuo:

There isn’t anything terribly controversial in what Gov. Palin is saying. This is orthodox Christian theology - the idea that God controls the outcome of all things. It is true in lives and it is true in politics. It is only because we live in a time of massive theological ignorance that clips like these raise an eyebrow. It is the kind of thing that evangelical Christians say to each other.

What he's referring to is this clip:

And particularly the reference to the war in Iraq being "from God." It bothers Kuo, however, not that she so blithely assumes to know what God's will is for the United States, particularly vis-a-vis the war, but that she so readily backed off from this sentiment in her interview with Charlie Gibson:

Kuo goes on to write:

In the interview she goes on to say, “I would never presume to know God’s will….”

Really? Truly? Does that mean that Gov. Palin is open to the idea that God’s will is for the United States to become a Muslim nation? One under Sharia law? Does Gov. Palin believe it might be God’s will for the United States to pass laws outlawing the freedom of speech? Is her faith and theology so insipid, so tepid that she has no idea what God’s will is? Or is it that she is simply trying to take the edge off her faith because her new political advisers say it is “too much.” I’m guessing it is the latter.

Gov. Palin’s popularity is based on the perception that she isn’t another Washington politician, isn’t someone who is going to be changed by Washington, isn’t going to sellout. Her remarks tonight should give all of her supporters ample cause to fear she may not be who they hope she will be.

Now, on the one hand, I think I know what Kuo is saying, namely, that in a general sense, all Christians know God's will -- to love God and to love our neighbors. But, to be frank, knowing that it in a general sense doesn't tell one anything about how that applies in particular circumstances. This requires what John Bennett referred to as "middle axioms," means of applying general theological and moral statements within Christianity to the more particular circumstances of life and society.

But Kuo seems to be arguing that, among evangelicals, a lot of the very particular details about God's will are presumed to be known, such as God's attitude toward religious pluralism, or how we should understand freedom of speech, and while I might be sympathetic to some of what Kuo thinks is God's will, I would urge a great deal more humility in seeking to associate our own conception of the good with what God understands our good to be. There have certainly been times and places where God's will was understood to require the limitation, if not the abolition of freedom of speech, and the problems with that policy weren't only that it was wrong in its understanding of free speech, but also that it was wrong in its discernment of God's will.

There are a lot of things about Palin that are disturbing, the primary one being that she simply doesn't seem to be minimally competent to be Vice President. But if Kuo's biggest problem with her at this point is that she is insufficiently certain of God's will, it might be worth his while to spend more time reflecting on the human capacity to understand God will, let alone know and apply it in a practical and meaningful way. Whatever Kuo may think about how this plays among evangelicals, it doesn't qualify as "orthodox."

Her misuse of painkillers prompted an investigation by the Drug Enforcement Administration and local prosecutors that put her in legal jeopardy. A doctor with McCain's medical charity who supplied her with prescriptions for the drugs lost his license and never practiced again. The charity, the American Voluntary Medical Team, eventually had to be closed in the wake of the controversy. Her husband was forced to admit publicly that he was absent much of the time she was having problems and was not aware of them.

"So many lives were damaged by this," said Jeanette Johnson, whose husband, John Max Johnson, surrendered his medical license. "A lot of good people. Doctors who volunteered their time. My husband. I cannot begin to tell you how painful it was. We moved far away to start over."

McCain's addiction also embroiled her with one of her charity's former employees, Tom Gosinski, who reported her drug use to the DEA and provided prosecutors with a contemporaneous journal that detailed the effects of her drug problems. He was later accused by a lawyer for McCain of trying to extort money from the McCain family.

"It's not just about her addiction, it's what she did to cover up her addiction and the lives of other people that she ruined, or put at jeopardy at least," Gosinski said in an interview this week.

Just to be clear about this, if Cindy was addicted to drugs and overcame that addiction, that's great and I'm happy for her. But she also ruined a lot of people in the process, and her husband abused his political connections to pursue payback. So, this is certainly relevant to the question of whether we want her husband to be president.

Why Were These People Arrested?

Via Sullivan, some scenes from the Republican National Convention: 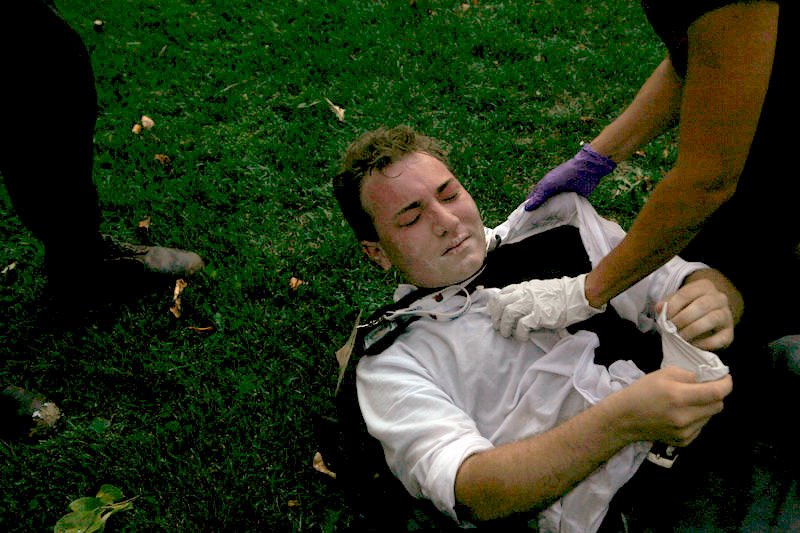 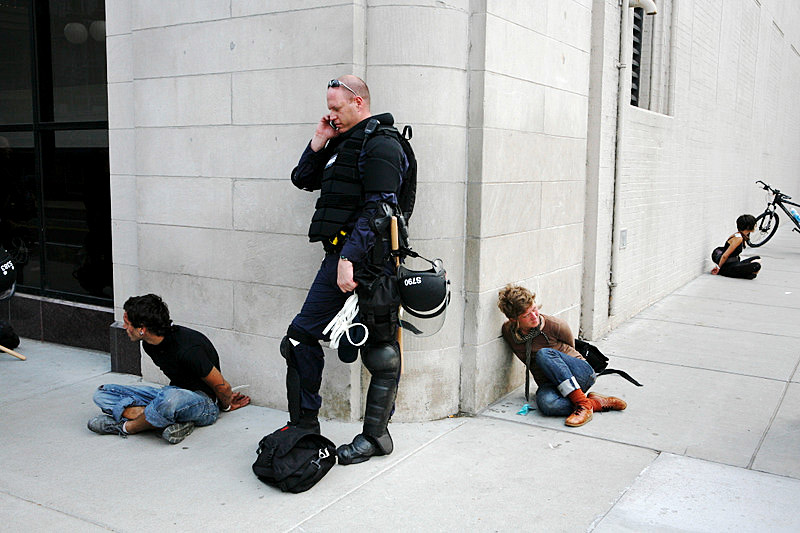 Seriously. What were the charges?

McCain has advisers from both the neocon and realist camps, and he’s too inconsistent to be easily labeled. In one area, though, he has been more or less constant: his belief in the power of war to solve otherwise insoluble problems.

This ideology of action has not been undermined by his horrific experience as a tortured POW during the Vietnam War, or by the Bush administration’s disastrous execution of the Iraq War. All this is not to suggest that McCain is heedlessly bellicose or reflexively willing to send U.S. soldiers into danger; he is the father of a marine and a Naval Academy midshipman, James McCain and John S. McCain IV, whose service he rarely mentions. And he opposed, presciently, keeping the Marines in Beirut in 1993, just before their barracks were bombed. But his willingness to speak frankly about the utility of military intervention sets him apart from his opponent. Senator Obama, though certainly no pacifist, envisions a world of cooperation and diplomacy; McCain sees a world of organic conflict and zero-sum competition.

That would be 1983, of course, when the Marine Barracks was bombed (I suspect a transcription error by Sullivan). But beyond that, this is our choice: More wars, as McCain has promised, or "a world of cooperation and diplomacy."

McCain may hate war, but he's more than willing to use it, easily and repeatedly, as a solution to problems that could be effectively solved otherwise.

Item #1: The McCain campaign yesterday released a new ad accusing Barack Obama of sponsoring a bill that advocated teaching "sex education" to kindergarteners. Is this true? Of course not! What the bill Obama supported did do was help inform and protect children against sexual prededators!

What this ought to demonstrate is that there is literally no depth to which McCain won't sink to win this election. That, all by itself, ought to exclude him from office.