The Latest Good News from Iraq

So let's take stock. Pretty much everyone has lost confidence in Nouri al-Maliki, though there's no replacement in sight who seems like a better bet. The police force is so corrupt that the best advice the Jones commission can offer is to disband it completely and start over from scratch. And the Iraqi army, after three years of intensive training designed by one Gen. David Petraeus, has a grand total of six battalions capable of operating on their own.

In other words, except for the fact that Iraq has a disfunctional government, a disfunctional police force, and a barely functional army, things are going great. I can't wait to see how Crocker and Petraeus spin this into an argument for staying another four years. 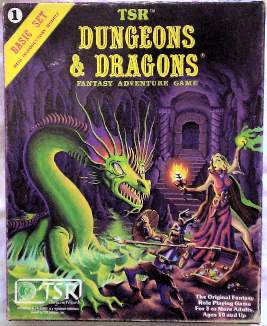 It must have been 1982 or 1983. My friend Tom came over to my house with his new discovery, passed on to him by his older brother, Bill. It was ... Dungeons & Dragons!

This game was a revelation to me. The idea of taking a stick and pretending to be a soldier, or grabbing a toy gun to play cops and robbers, all of this was of course old hat to us as we transitioned from childhood to adolescence. But the idea of a "role-playing game," in which our interactions were governed by rules, and in which we could realize our fantasy character concepts, and then play them out, was full of wonderful potential. And after rolling up our first characters, we were off and running.

My first D&D character was a magic-user (that is to say, a wizard). I can remember quite clearly the massive suckage that was the Basic D&D magic-user -- d4 hitpoints, one spell per day, proficient in only the dagger and the sling! Oy, was that guy asking for trouble walking into the Caves of Chaos near the Keep on the Borderlands! And yet, he survived, at least long enough to blast a few fireballs at some trolls later on down the line.

Before long, I had accumulated both the Basic and Expert D&D sets, plus the Advanced D&D Player's

Handbook, Dungeon Master's Guide, and Monster Manual, plus a few of the classic D&D modules. In addition, I had the boxed set of Gamma World and a bunch of TSR "mini-games." Gary Gygax and the good folks at TSR had sucked me in good. For two or three years, my leisure time was about living and breathing role-playing games in general, and D&D in particular.

Alas, when my friends' interests moved on, I no longer had anyone to play with. I can remember an entire summer when I was about 12, when I would sit around, without a group to play with, rolling up characters on the AD&D character record sheets. When we would occasionally play, we could never get a campaign going long enough for my characters to get very far up the level heirarchy. Not to mention, if I wanted to play a Paladin (and I did, oh so badly!), I essentially had to cheat my die rolls in order to meet the qualifications.

Although by high school I would still occasionally break out the books and play, when I could find someone to play with, D&D was pretty much in the past. In college, I tried to get with a gaming group, but by then they were on to 2nd Edition D&D, and I just couldn't get myself all that invested in the complex new rules.

It may be a bit embarassing to admit, but it wasn't until I was 30 that I finally got back into the game that had been my obsession when I was 12. The proximate cause of my renewed interest was playing Baldur's Gate on my computer the summer after I finished my comprehensive exams (instead of working on my dissertation, which is what I should have been doing!). The following fall I stumbled on the new 3rd edition of D&D in a Princeton hobby shop, and once I found a group, it was off to the races again!

Since then, I've been fortunate to stay connected with good gaming

groups, and I have to say that I've found the 3rd Edition rules to be far superior to the old Basic and AD&D rules that I used to use (though nostalgia still drives me back to those books from time to time).

And now, as some of you may have heard, Wizards of the Coast (which bought D&D from TSR back in the 1990s) is set to release a 4th Edition of the game in 2008. On the one hand, I'm eager to see if they improve on the strong foundation they've already got. But on the other hand, I like the game as it stands right now, and don't really have any desire to start from scratch learning a whole new ruleset (particularly after the insult that was D&D 3.5, which I'm only playing now because it's the system my current group uses). So, we'll just have to wait and see. Will D&D 4th Edition be yet another great revelation, or will it be, like it's disapointing sibling 2nd edition, just something that I don't want to get invested in?

Harry Potter and the Obnoxious Blowhard

In this week's New York Times Book Review, Christopher Hitchens reviews the Harry Potter and the Deathly Hallows. After beginning his ruminations with a fairy typical reference to George Orwell, he goes on to lay his snarky atheistic template over the Potter universe. Here's a typical excerpt:

Most interesting of all, perhaps, and as noted by Orwell, “religion is also taboo.” The schoolchildren appear to know nothing of Christianity; in this latest novel Harry and even Hermione are ignorant of two well-known biblical verses encountered in a churchyard. That the main characters nonetheless have a strong moral code and a solid ethical commitment will be a mystery to some — like his holiness the pope and other clerical authorities who have denounced the series — while seeming unexceptionable to many others. As Hermione phrases it, sounding convincingly Kantian or even Russellian about something called the Resurrection Stone:

“How can I possibly prove it doesn’t exist? Do you expect me to get hold of — of all the pebbles in the world and test them? I mean, you could claim that anything’s real if the only basis for believing in it is that nobody’s proved it doesn’t exist.”

For all this apparently staunch secularism, it is ontology that ultimately slackens the tension that ought to have kept these tales vivid and alive. Theologians have never been able to answer the challenge that contrasts God’s claims to simultaneous omnipotence and benevolence: whence then cometh evil? The question is the same if inverted in a Manichean form: how can Voldemort and his wicked forces have such power and yet be unable to destroy a mild-mannered and rather disorganized schoolboy?

Now, in the first place, it should be noted that it's simply not true that "theologians have never been able to answer the challenge" of theodicy. Hitchens may not like the answers, but the problem is far from unanswerable. I'll confess that I too am left cold by most of the philosophical attempts at solving the problem of evil, but that doesn't mean that a) no one has ever tried or that b) some of the attempts actually do solve the problem in a philosophically respectable (if finally inconclusive) manner.

This is the continuing problem with Hitchens' view of religion: He is simply incapable of hearing anything that disagrees with his own preconceived notions of what religion is. I know he's friends with Andrew Sullivan, but the impression I get is that Hitchens tolerates his religious friends only to the degree that they don't talk about religion. Ok, fair enough. But why Hitchens can't do us the same favor is beyond me. But then again, I continue to be perplexed as to why people keep hiring Hitchens to write for them given his obvious flaws as a writer and a thinker.

But, back to the Potter review. I certainly can't fault Hitchens for seeing the world Rowling has created as being wholly secular. God is never explicitly mentioned. No one ever prays, or even attends church (though oddly, Sirius is Harry's godfather, implying that Harry is, in fact, baptised). Yet, no one ever attends church in a C.S. Lewis or J.R.R. Tolkien novel either, but these novels are deeply suffused with their authors' Christian sensibility. The same seems to be the case for Rowling, who is on record as saying that she is a Christian and does believe in God.

But in any event, the religious symbolism is there for those with eyes to see. As John Granger has noted at some length, Harry Potter's universe is suffused with Christian symbolism -- Pheonixes, Unicorns, and Stags, the names of characters, as well as the overall narrative arc of the story. After all, the great underlying theme of  the Harry Potter series is the same as that of the New Testament: "Greater love has no one than this, that he lay down his life for his friends" (John 15:13).

Nevertheless, the great thing about a piece of literature like Harry Potter is that it doesn't mean only one thing, but opens itself up to myriad interpretations. So, a secularist like Hitchens looks into the mirror of the novel and sees himself staring back. I do the same. But to suggest, as Hitchens does, that what we have in fact is a primer for a godless world seems to miss much of the literary weight and subtlety of the books.

But then, as has been amply demonstrated, Hitchens doesn't do subtle.

Are you a feminist?

Are You a Feminist?

Since I haven't done a Geek Friday in a while, I'll make up for it today, even though it's Tuesday, because I came across this great post at "Forever Geek," listing the top 10 worst Science Fiction TV shows ever. Here's a link.

The list, for those of you who don't want to follow the link (with video, mind you!), is as follows:

A couple of comments. First, I think you've got to cut Sam Rami some slack for Cleopatra 2525. After all, the Rami brothers are professional purveyors of crap. They don't set out to make something good, and ruin it through lack of talent. Their whole gimmick is to make the best crap possible. So of course Cleopatra 2525 was awful, but it was brilliantly awful.

Second, I seriously though that I had imagined "Manimal." But it turns out that, no, somebody really did produce this pile of poo. I will also note that men's suits in the '80s were really bad.

Third, and finally, "Far Out Space Nuts" was very funny when I was eight, and I'm not going to debase my fond childhood memories by subjecting it to my adult cynicism. But ... it really does look stupid in retrospect.