End-Times Follies (and I do mean "follies")!

Well, you've got to give the major news media credit, when fundamentalist crazies start crying about the Apocalypse, they dutifully come running to report. Both CNN and Newsweek are covering this as though it were an actual story. Media Matters has the following excerpt from a CNN report last week:

PHILLIPS: So, Joel, are we living in the last days? I mean, let's talk about the specific signs to watch. You've written about them. What does the Bible say, and are we there?

ROSENBERG: Well, people are very interested, I agree. Tim and Jerry's books deal with the Rapture, the disappearance of the church, and the events going forward in Revelation. My theories -- The Ezekiel Option, The Copper Scroll -- are about events that could lead up to the Rapture and the return of Christ. Yeah, people are interested because the rebirth of Israel, the fact that Jews are living in the Holy Land today, that is a Bible prophecy. When Iran, Libya, Syria, Lebanon, Russia, they begin to form an alliance against Israel, those are the prophecies from Ezekiel 38 and 39. I've been -- that's what I'm basing my novels on.

I've been invited to the White House, Capitol Hill. Members of Congress, Israelis, Arab leaders all want to understand the Middle East through the lens of biblical prophecies. I'm writing these novels that keep seeming to come true. But we're seeing Bible prophecy, bit by bit, unfold in the Middle East right now.

Continue reading "End-Times Follies (and I do mean "follies")!" »

I have only voted for a Republican once in my life. I haven't always voted for Democrats, but this was the one and only time so far that I've ever voted Republican -- the 1988 Connecticut U.S. Senate race between Joe Lieberman and Lowell Weicker.

For some reason, I always liked Weiker. These days, we bandie about the phrase "independent Republican" to describe poseurs like John McCain and sycophants like Arlen Specter, but Weicker really was independent. He stood up against Nixon during Watergate. He campaigned for civil rights legislation and against apartheid in South Africa. He was arrested several times for his principles, and he worked hard to maintain his integrity.

So, it should have been no surpise when the Republicans turned on him. Although he ran in '88 as a Republican, prominent Republicans were busy endorsing his opponent -- Joe Lieberman.

Bush and the Middle East

The question that has been buzzing for a few days around the blogosphere is why liberal blogs are strangely silent on the subject of the current conflict between Israel and Lebanon. Andrew Sullivan, Oxblog, Matt Yglesias, and Kevin Drum have all weighed in on the issue. Kevin's initial post on the issue was, I think, largely correct, insofar as on the right, all they need to say is "Israel is right!" over and over again, without really offering any analysis or interpretation, let alone putting the whole thing in an historical context.

The position taken by many liberals, myself included, on the other hand, depends heavily on understanding and parsing the nuances of almost 60 years of Middle East history, as well as the moral ambiguities inherent in any counter-insurgency. Having been in Israel, the West Bank, and the Gaza strip, I have enormous sympathy for the plight of the Palestinians, and contrary to the popular narrative, I don't think that either the second intifada nor the failure at Camp David were entirely Yassir Arafat's fault. At the same time, Arafat was a horrible leader, and much of the current state of Palestinian society can in fact be placed squarely at his feet.

Tom Tomorrow (he of the eponymous comic) notes on his blog that he has apparently REALLY begun to see the future. First, note this cartoon from 2003:

Then check out this video of William Kristol of the Weekly Standard: 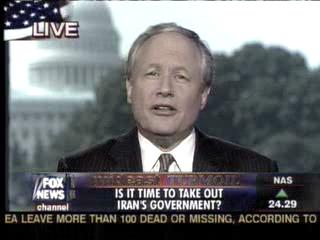 Lo these many years ago now, Andrew Sullivan labeled opponents of the Iraq war as "objectively pro-Saddam," echoing a statement made by George Orwell during World War II that pacifists were "objectively pro-Fascist." Yesterday, while offering a mea culpa for some of his other comments, he defended that one:

As for my later comments about opponents of the Iraq war being "objectively pro-Saddam," that seems to me to be indisputable. If they'd had their way, he'd still be in power. On the intellectual honesty front, I think expressing regret for rhetoric written while human ash was still in the air in New York City days after I used it is fair enough. And I have also expressed "shame and sorrow" for my misjudgments on Iraq in general. Some on the left want more from war-supporters like me. I'm for self-criticism; not masochism.

Later one, he published a letter from one of his readers: "Oh, great. I guess those of us opposed to war with North Korea are objectively pro-Kim Jong Il.' Does that include you?" To which Sully replies:

Well, objectively (and it's Orwell's original usage), I am pro-Kim Jong-Il, and if he didn't have the capacity to take out Seoul, I'd be far less sanguine about it. Yes, there are costs and benefits to all actions. One of the costs of inaction with respect to Iraq would be Saddam still in power, his psychopathic sons waiting for accession, continued starvation and immiseration of thousands, more money being sent to bribed UN officials, and merely a delayed (and thereby ultimately more virulent) spiral into the kind of civil, sectarian chaos we are now witnessing. Look: I got a lot wrong. But I am still glad that monster is in jail.

I really am hopeless:

And, of course, the original Aimee Mann video, Voices Carry."

Yes, one day I'll get back to "serious" blogging. But it is the summer, after all. And I'm doing my "serious" writing off line.

Have I mentioned that I'm a huge Aimee Mann fan?

Lindsay reflects on "Casimir Pulaski Day," (the video linked above) a song by Sufjan Stevens, writing:

Anyway, I think I like the song because it's about someone who believes in God trying to reconcile his faith with reality. The singer is confused about why his God is taking his girlfriend away, even though he and his friends are praying for her.

To me, the last four stanzas of the song are the most interesting:

The narrator is describing how, on the morning of his girlfriend's death, a cardinal hits the window. In the last two stanzas, the singer is is seeing God in the bird's blood spattered on the window, but he can't accept that this God he sees on the spattered pane is a god of love or mercy.

I took those lyrics in a slightly different way (or rather, perhaps I took them in the same way, but took something different from it). No doubt that last line: "He takes and he takes and he takes" is an expressing of the uncomprehending rage of an individual who fails to understand why an omnipotent God would allow such suffering. At the same time, the line, and those that precede it, also speak of the presence of God in the midst of suffering. This strikes me as the paradox at the center of the problem of evil -- Can God be both all loving and all powerful at the same time.

If I were more the philosopher and less  the theologian, I might have a lot to say about the various approaches that have been taken to answer this question (none particularly satisfactory), but it strikes me that the reason that philosophy does such a poor job answering the question is because it tries to see the situation from the outside. As a theologian, looking at the problem from the inside, what I see is precisely the solidarity that God shares with the suffering of the world.

God's face is reflected in the cardinal's blood splattered on the window. But rather than taking this as a repudiation of God's love or mercy, I read it precisely as an affirmation that God is there amidst the suffering of the mourners. God shares the suffering of the suffering, the pain of the afflicted, the loss of the grieving and the even the fate of the dead. And, in sharing these things, God overcomes and transforms them.

But that overcoming and transforming aren't the kind of things that can be seen from the outside. From the outside, the cardinal's blood just looks like the remnents of a pointlessly dead bird. But from inside the perspective of faith, is is an expression of God's compassion (literally, "co-suffering), and that compassion is significant for  the believer in pain.

But Christan faith also affirms the power of God. That such power can be perceived in the transformation of mourning and the healing of the wounds of loss is something that's difficult to see in the midst of things. It seems then that God is simply arbitrary power, as Lindsay points out, neither loving nor merciful. But the Christian message is that God became human precisely because his love and mercy were most fully expressed, not by acts of arbitrary power, but by sharing the human condition.

This is the same kind of issue raised by XTC's "Dear God" -- the suffering of the world is evidence against the existence of God. But if God is also affected by the suffering of the world, and if the world has its own freedom, which is necessary to its integrity, it may be that God's most potent action can be to be among us in the midst of suffering, and even in the midst of our own cries of anguish and anger against God.

The Bible doesn't say only one thing about God and suffering. It says many things, many  of them contradictory. Job struggles with the question of God and suffering, and doesn't answer it in any kind of definative way. The story of Jesus offers another answer. In the end, that is the answer that makes the most sense for me. In a fallen world, where else would you expect to find God except the cross.

Post-Script: By the way, I think that the song is good. Not great. Just good. "Dear God" is much better.

Post-Script 2: Also, I have to admit a degree of affection for the song anyway, just because I went to Casimir Pulaski Elementary School in Meriden, CT.