Although it's a bit early for presidential endorsements, and I reserve my right to change my mind later on, I am now officially engaged in the Draft Al Gore movement for the 2008 Presidential election. 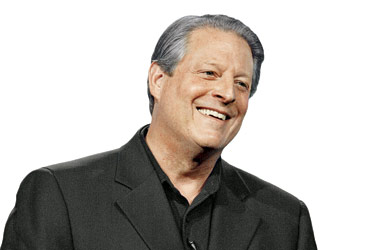 In part, I'm joining because the new movie is yet further evidence that Gore has a Big Brain, and at least a desire to try to answer the biggest problem facing global society today -- Global Warming. He was right 20 years ago; he was right in 1992 when Bush Père referred to him as "Ozone Man." He was right in 2000 when he was savaged over many things, including his stance on Global Warming. He was right when he supported the Kyoto Protocols. He was just plain damn right! And the last eight years have simply further confirmed how right he was.

But another reason for joining is because I'm increasingly of the opinion that we need to stop the "Hillary Clinton is Inevitable" train as early and as completely as possible. She may wind up being the nominee, but she shouldn't be the presumptive nominee.

This weekend's hit piece on the Clintons' marriage is exhibit A as to why a Hillary candidacy would be a bad idea. It's not that its her fault that the New York Times of all publications chose to run a tawdry and base tabloid article on an issue that has nothing to do with her candidacy. Hillary would be right to be outraged by the piece. But lets face it, this is the kind of treatment that we can expect to see for the next two years. Added to the fact that she is (again unfairly) a horribly divisive figure in U.S. politics, and that there are many states that might otherwise swing Democratic that would never vote for her in a million years, and I can't imagine a scenario where a Hillary nomination wouldn't be a de facto act of handing the Republicans another 4 years in the White House.

Of course, the obvious rejoinder is that Al Gore is also a divisive figure whom the media habitually treat unfairly. Why prefer Gore to Clinton if they can both expect the same treatment?

But there is one very important reason that Gore has the advantage over Hillary: He has already won the majority of the popular vote in a national election even with the kind of character assassination that has been cast at him. And the past eight years have only been one continuous example of why the final outcome of the election was a huge mistake. So I would argue that the case can be made fairly strongly that, all things considered, Gore's results ought to be better in 2008 than they were in 2000.

Therefore, I'm endorsing Al. Click this link, and do thou likewise.