I'll probably have more to say in the coming months about the legacy of Dietrich Bonhoeffer, but for now 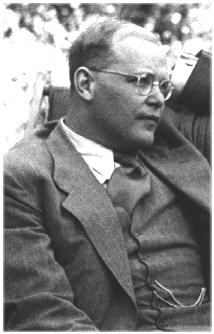 I want to point out Larry Rasmussen's excellent essay in the latest Sojourners about what Bonhoeffer's theology, life and resistance mean today. I suggest reading the whole thing, but here are several key points:

What are the lessons for the church from Bonhoeffer’s insights and Stern’s conclusions?
1) Because they were culturally captive, Protestant churches suffered confusion about true patriotism. Ideologically and institutionally aligned with the state, they were unable to take the measure of civic loyalties and faith community loyalties when these conflicted.
2) Given this entanglement of church, state, and culture, national turmoil generated church turmoil. Even the resisting church had to rediscover a faith to live and die by, and do it amidst fast-moving events. New ways to render faith publicly visible in discipleship practices—such as resistance, community, and institutional up-building, and rethinking the faith itself—became the task of ministry, all amidst crisis and war. Too much was asked of far too few.
3) The churches needed allies. They found some but didn’t create a genuine movement in sufficient time to counter the growing base of right-wing populism. A church community that resists by way of confessing is necessary; but short of a broad-based, cross-cutting movement of allies, both secular and religious, it does not suffice.
4) Moral-spiritual formation, with its powers of discernment, was a needed habit of life before crises arose so that fascism could be sharply challenged before it became entrenched. “Resist the beginnings” is the requirement. Resist the beginnings of compromises that dull the moral senses and take their ease in a life of cheap grace. Resist the beginnings that give evil, willed blindness, and civic passivity a foothold. Don’t let the right eye wink at complicity or the left hand abet it. Resist becoming unwitting accomplices to an errant leader. Resist all the places in your own soul that give way. A discerning spirituality is as vital as the right politics and indispensable to it.

Posted at 10:25 AM in Religion, Society | Permalink